Post pictures and information about your own personal model railway layout that is under construction. Keep members up-to-date with what you are doing and discuss problems that you are having.
Post Reply
217 posts

MUST finish by 18th December as that's the clubs diorama competition.
Today added water to the stream, very flat no ripples as these have to be added as it's
setting - BUT when ? Far too liquid to hold any surface markings, by morning will it be
too dry ? I just have to take the chance. 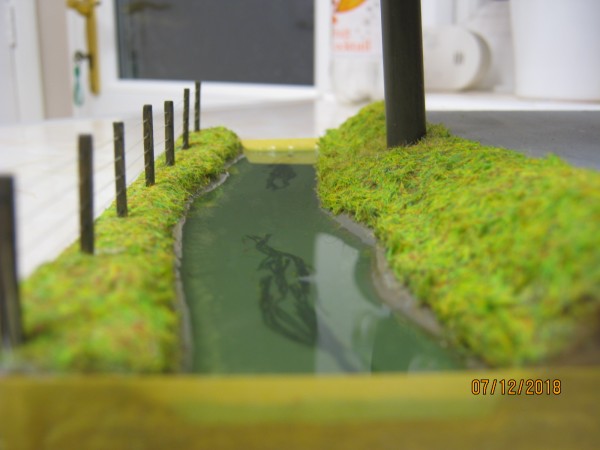 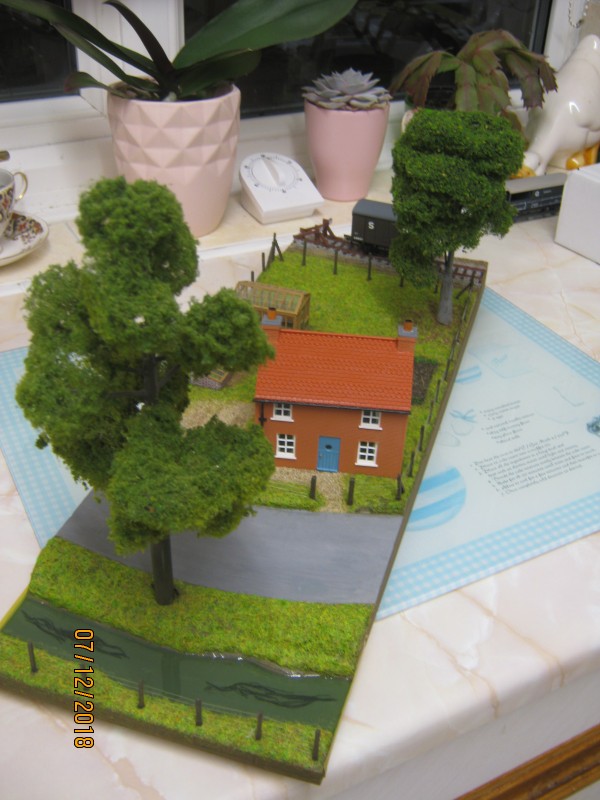 How this escaped damage sitting in my garage I don't know, had to carefully remove loads
of cobwebs.

Ripples can be added after with Modge podge gloss, see 19:15m on here
The challenge is to find some in time!

I think other scenery makes do something similar, too.

nice work, small but worth a look.
Top

possibly obvious answer to this question, but would you say building dioramas are worth the cost and time for developing skills vs attempting it first time on the layout for real?
Layout: https://www.newrailwaymodellers.co.uk/Forums/viewtopic.php?f=22&t=53269
Top

I'd say well worth the effort, they can become displosable apprentice pieces.

Cost are usually minimal for the modeller who has gathered a pile of odds and ends.
Take my 'Blue Gate Cottage' as an example, the trees are used on at least 3 different
pieces of work, the Aqua Magic was some left from another job, I always have a bag
of matchsticks and reel of fishing nylon for fencing. What's next, Ahh the building is
100% from plasticard and paper again from a large general stock, that greenhouse and
two cold frames had been bought on a whim several years ago and parked unmade in
the loft ! What's left ? Grass and sand are something I always have around, obviously
my sand is collected for free, but the bags of grass do cost, but are always in use for
all my general modelling.

Seriously I can't think of anything I bought for it other than a set of gardening figures
and tools, yet all I used was the quilt line although it was intended to use a watering can
somewhere. Oh and I bought the embroidery thread for stream weeds.

In reality MOST of my dioramas have a direct cost of under £10 each - so well worth it.

I have to concur with Dad-1, my recent venture of a diorama has taught me so much! And if mistakes are made, it hasn't ruined your layout, plus first attempts at a skill will always result in "hmmm, I am sure I could do even better next time!". Like you say, pretty obvious, the more goes you have of something, the better you get at it, so best to try techniques once or twice off layout to perfect them, "practice makes perfect!"
Cost? You need all the materials for your layout, which is acres of area, compared to the small patch of diorama, it only makes a small dint in your supplies. Well worth the learning curve cost. Whatever small cost it incurs will pay dividends later in less waste getting it wrong!

A new diorama, too small and simple to include anywhere else. "The Old Farmhouse"
I have a love of the English countryside and this really follows on from last years "Blue Gate Cottage".
Having been rather pre-occupied with other things for several months I've had to force myself to start
a new diorama for the clubs annual competition.

An awful piece of water stained and warped thin ply the basis of a 'Fast' build. By putting heavy duty
runners down the underside of each edge most of the warp has been pulled out. Before that just looking
for inspiration.

My occupational lane under bridge made in a few moments a while back to hold centre stage, the old
Hornby abandoned farm house building has been in my loft for years, I think I had it given to me. 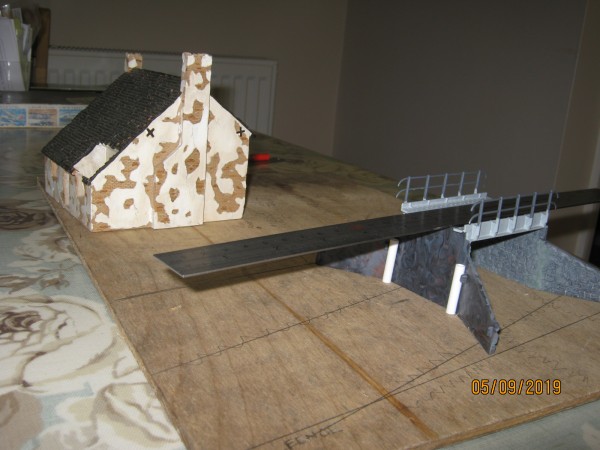 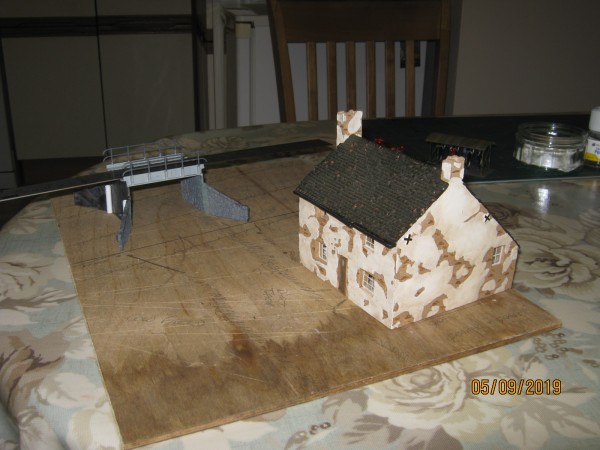 In the last 24 hours my embankment timbers all fixed, believe me it was not easy matching to less than a mm
of the kits height. Painting ply to try and add some water resistance for the inevitable flood of watered down
PVA for holding sand and grass. 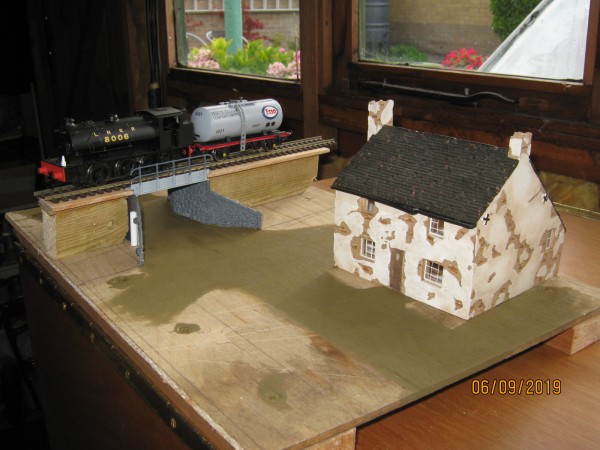 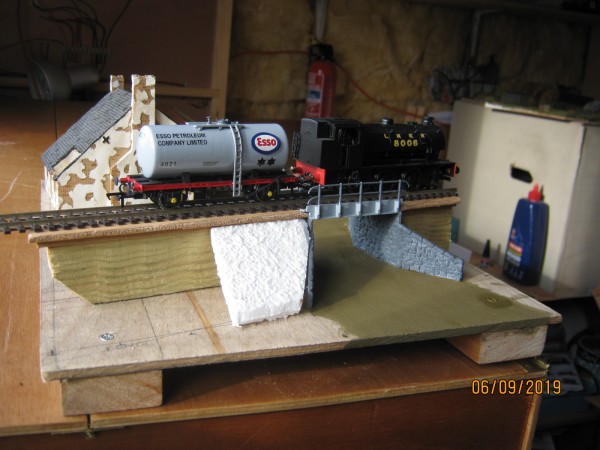 I should have spent more time planning, but limited to what can be thought through in an hour !
I seriously hope this may revive my modelling instincts, Only time will tell, but keep it simple !! 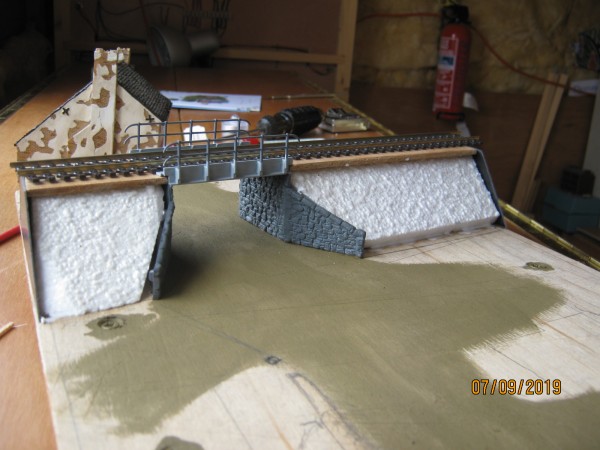 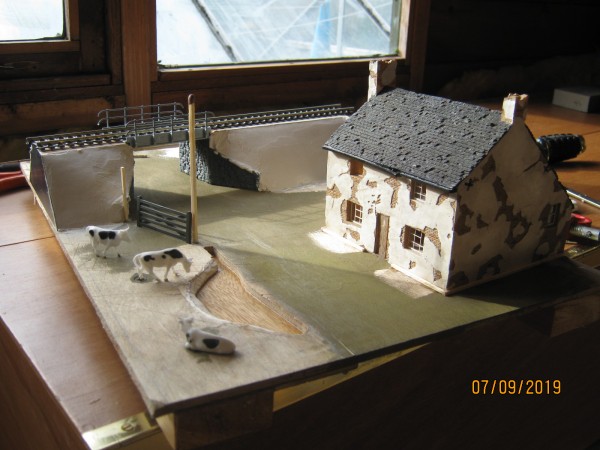 Now nothing until Monday.

Looks very therapeutic Geoff. this was my bit of therapy that got me going again in 2001.

The "butt'n'ben" we stayed in on the Kintyre Peninsula, only twenty yards to the sea at high tide. The longer we stayed the less we wanted to do. It's a bit battered now and needs the colours freshening up but it convinced me to give up trying to fill the loft and come down into the warm, or cool depending on the season.
Growing old, can't avoid it. Growing up, forget it!
My Layout, My Workbench Blog and My Opinions
Top

Currently struggling for time and drive, but in between assembling a wooden storage shed
I laid some grass. I shouldn't have done so as other foundation building not completed, but
I wanted to see some greenery !!

I was going to add a couple of pictures, but system failure again .......
Perhaps later ? 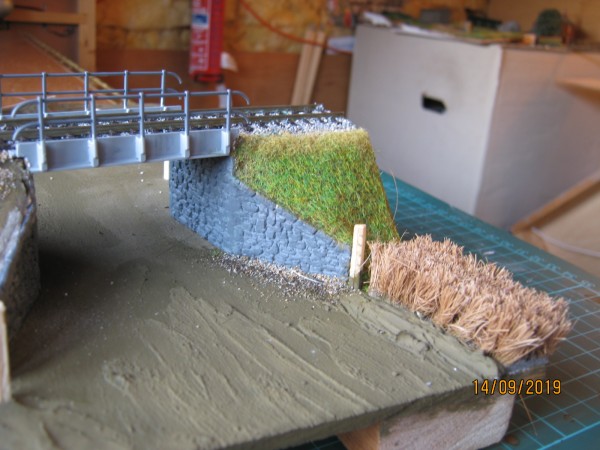 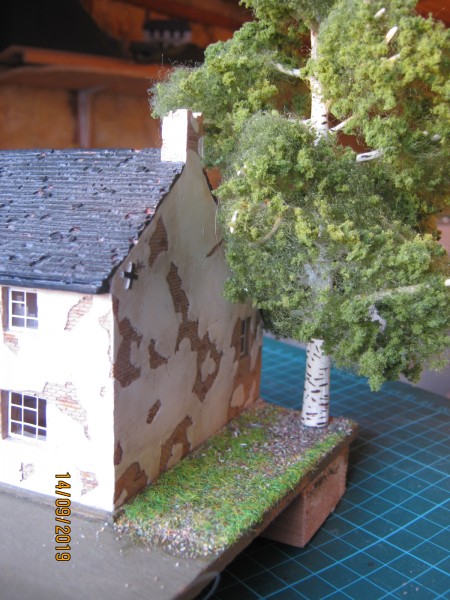 I feel better for that. More shed building and out tomorrow - No peace !!

After nearly a month of inactivity on this diorama I forced myself
to lay some additional grass to more, or less, finish this back of
the scene. Still quite wet and brought indoors from the shed to help
drying. 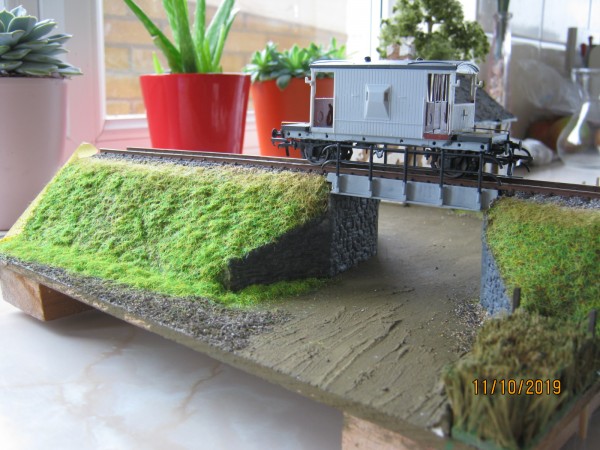 7 different grass compounds laid to try and get a natural look. 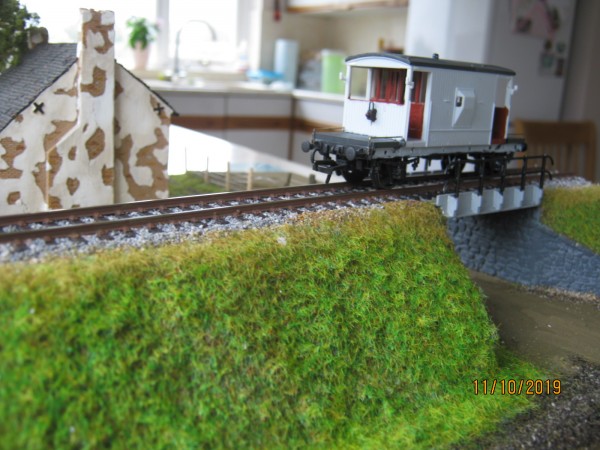 Still an awful lot to do, and that brake van is part of the backlog, started
back in August 2018 !!

Painfully slow .....
Another small step forward, all embankment now with grass
and the mixed sands giving a good representation of the gravel
roadway under the railway. 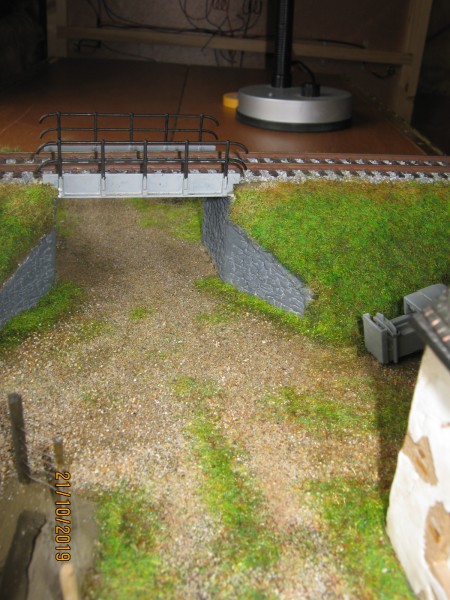 Lovely modelling, Geoff (as usual). Another diorama screaming to be put on a layout.

I do thoroughly enjoy the making of small scenes, for me the diorama is perhaps the cream. No
years of sorting out tracks, electrics, just let your imagination go free. This was inspired by seeing
the small occupational bridge kit on someones layout and I thought it offered opportunities more than
this guy had done.

For the inexperienced here are some of my 'artists' pigments. First various flock types of static grass
scatters. Nature never likes mono culture, so there should be many variations, very subtle but there. 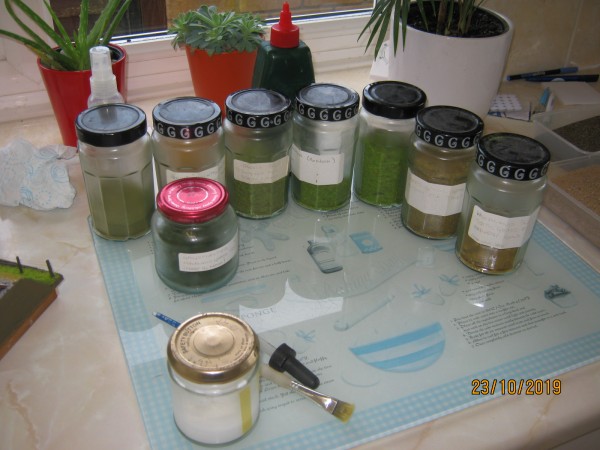 I'm also an avid collector of sand. Nearly every beach has a differing sand grain size and colour. These
again are used together to paint a picture. These are Cleethorpes, Camel Estuary (Rock), West Bay and
at the top Sandown I.O.W black sand. In addition I have Weymouth, Minehead, Lyme Regis, Tenarife,
Builders white sharp sand, and Builders redish sand. Probably a few others as well !! 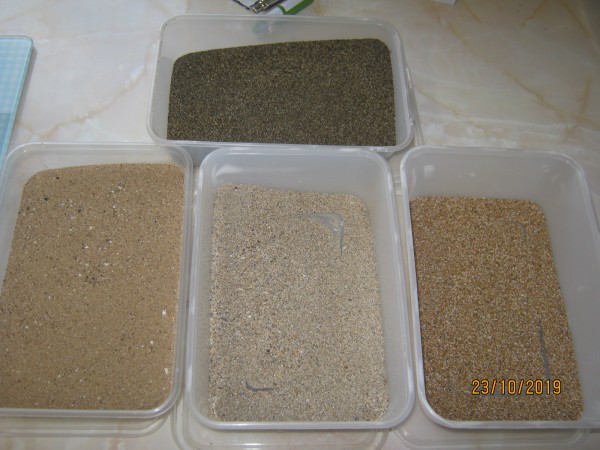 Here I've just filled in a corner with the multi-layered grass and droppered on watered down PVA. 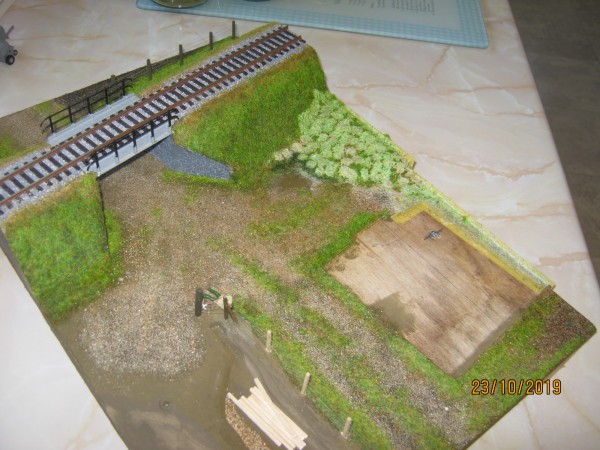 Now a 24 hour wait before I can do more.

This thread has been neglected for close on 3 weeks, with little more progress to report, most
recent time spent making a few wagons. In fact these next 2 pictures are already in My Workbench
thread as way of explaining why I'll be going quiet and putting West Bay Wagon Works onto short
time working. 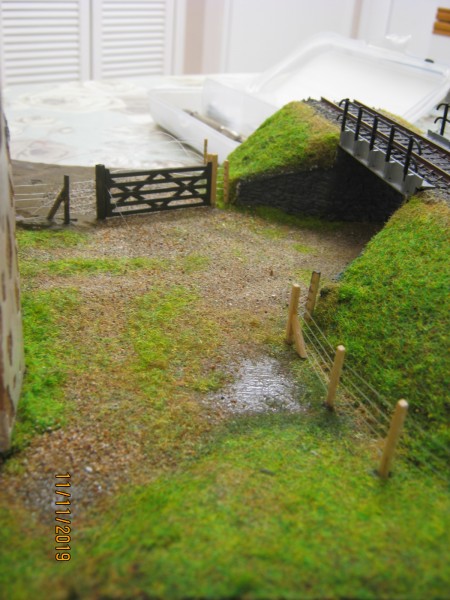 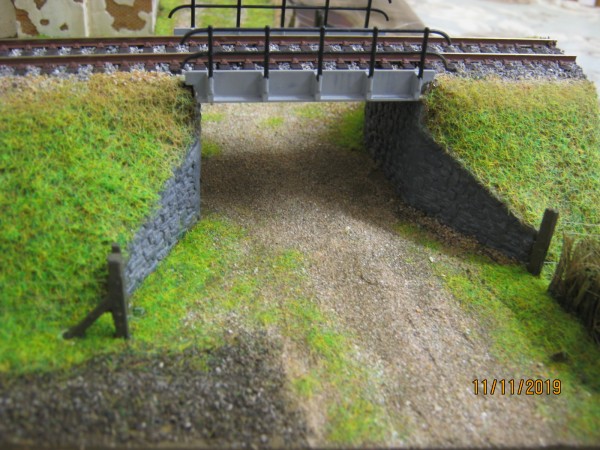 What was not photographed at the time was the pond opposite the farm house which was being prepared
for filling with Deluxe Materials Magic Water. Well this time it proved to be a disaster for several reasons
all my own fault.

First I'd put food colouring in a new 250 ml bottle to try and produce a brown. Through the thick bottle
sides it didn't look too bad, but when poured in it was more like a toffee colour very dense and too red.
I decided to try an escape route of pouring more of my pale green in to mix and reduce the dark colour.
What happened was the combined depth was greater than they recommend, probably twice advised depth.
It still didn't mix very well, and just the wrong colour.
I left overnight to see what happened, the answer was it hadn't dried much although there was a set skin
around the edge. Disaster, not prepared to leave, scraped out and using a small stiff brush washed away
the liquid residue and dried out with a paper towel. A few small scrapes through the enamel have been
touched-up and with luck I'll try to fill with my pale green Aqua Magic on Wednesday evening.

That means the only small advance has been threading the nylon fence wires through the last fence posts.

This diorama has a deadline of the beginning of December so I don't expect to be doing anything else. With
exception of being the Club Chairman and we have the AGM tonight (Tuesday).