Bob can the female genes with the colour become dominant? Sandy's mother was ginger as are all of her offsprings in all of her litters. They also seem programmed for longivety, mom went beyond 20yrs, daughter has already clocked up 17. Apart from trying for 23hours/day asleep, and giving up on the tree climbing she still behaves like a kitten.
Growing old, can't avoid it. Growing up, forget it!
My Layout, My Workbench Blog and My Opinions
Top

Double post due to broadband transmitter\receiver rebooting. Joys of the countryside!
Growing old, can't avoid it. Growing up, forget it!
My Layout, My Workbench Blog and My Opinions
Top

Not that I am aware of. The colour genes are sex-linked i.e. on the X chromosome and do not go "dormant" AFAIK.
If you want I'll explain further in a pm.
But the colour gene once on stays on; other genes can be switched on or off at different stages in a cat's life but not the ginger or black genes.
(Stands back and waits for a cat expert railway modeller to flame him ?)
Cheers
Bob
Top

OK thanks Bob. I think its time I got round to updating the pictures of the layout that started this thread, as it's now reached the stage of everything is there but definitely not finished.
Growing old, can't avoid it. Growing up, forget it!
My Layout, My Workbench Blog and My Opinions
Top

Hi John, can we have some photos of your FR 20 please?

I am so jealous of it as it is such a reat model!!

I'll make sure it's there! I've now passed the situation which I envisaged at the beginning, that is a heritage line often has more locos and rolling stock than it has space for. No 20 and train are regular visitors, and as soon as I have a working off-layout store City of Truro and the 14XX+Autocoach will join her. It's getting difficult to move anything, as every siding is near full. I'm driven to allowing short trains to enter the platform track that's already got a 3 car DMU stabled in it!
John W
aka Bufferstop
Growing old, can't avoid it. Growing up, forget it!
My Layout, My Workbench Blog and My Opinions
Top

I've taken a few more photos today, as everything I intended to put into the layout is now done even if not necessarily to a final state of completion. The area which was rather raw when I started the thread is from the overbridge and water tower round to the station building on a road overbridge. 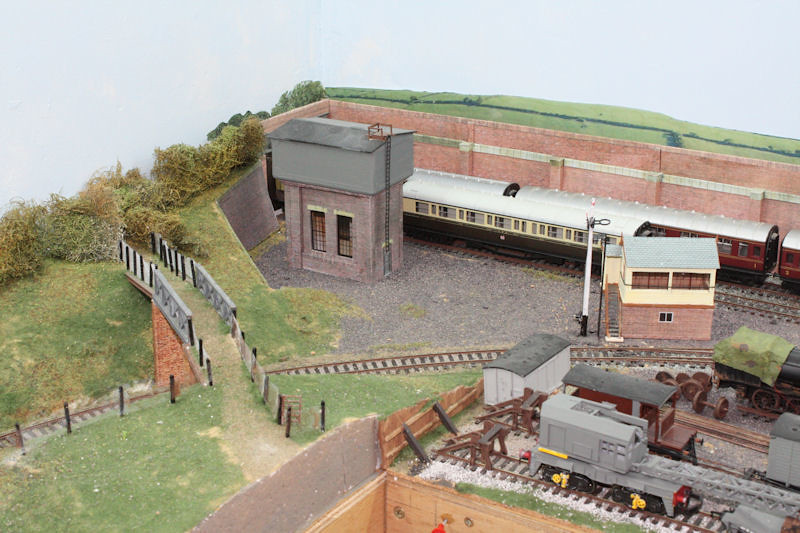 This is the cutting and overbridge that separates the canal bridge scene from the former junction station. The bridge is made from a section from a Dapol footbridge kit on two brick built pillars. The approach slopes are thick card with sections of Plastruct RSJ to support them. The footpath disappears into a staggered opening through a thick hedge, hiding the point where it reaches the backscene. The mesh fences are the material that bridal veils are made from. Note the open gate. I'm collecting figures for a bunch of gricers with cameras and wrong colour hi-vis vests to go on the embankment. The water tower is Scalescenes with the Dapol or maybe even Airfix tank on top. What used to be part of the main line at the back is now used as carriage sidings which disappear under a bridge the opening of which cannot quite be seen from any vantage point around the layout. Moving to the right a little we have.. 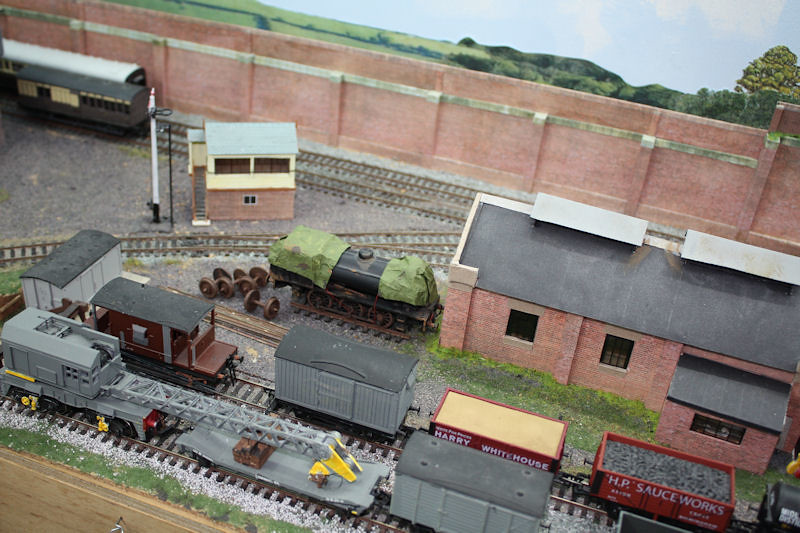 This is another "corner" radius down to 20", obscured by high ground and foreground clutter. There are three restoration projects going on here, the breakdown crane (will it ever be needed?), a brake van which has already had some planks replaced, and an austerity tank which is often referred to as "the rusting hulk." The signal box isn't yet stuck down, and has a removeable roof as one day it may get some inside detail. The loco shed on the right is scratch built using Scalescene brick papers. Actually parts of the retaining wall kit. The small office on the side has some internal fittings, desk, filing cabinet, regulator clock on the wall and a plan table in front of the window, with a large drawing starting to roll up. Pointing the camera in the opposite direction we can see right to the end of the layout 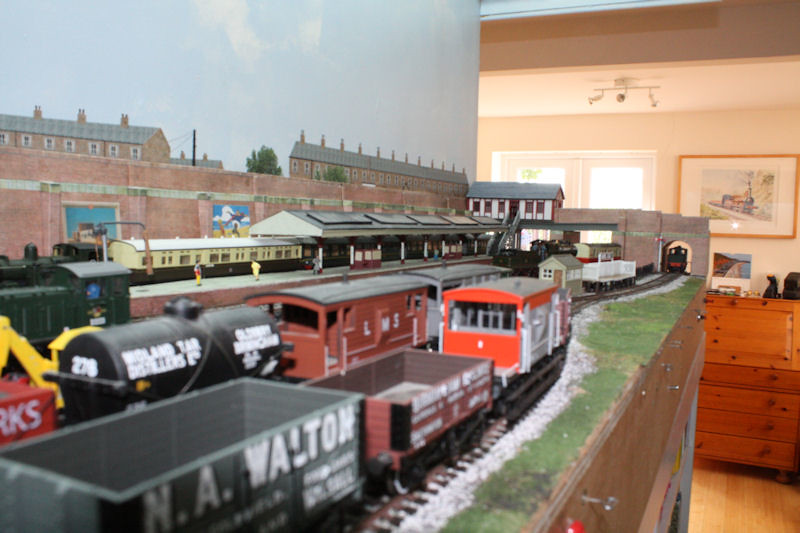 This is the one view in which you get a view of the rest of the room (Kenny note the picture on the end wall). This view also shows that the "Gasworks Tunnel" on the right is no longer than the roadbridge beyond the station. It's quite obvious that the whole place is chocker with rolling stock, a characteristic of many heritage sites. The autocoach on the far platform is buffered up to a three car DMU which is stabled there whilst the visiting City of Truro is squeezed into the parcels bay where a "Tartan Arrow" van houses a photo exhibition of the restoration work. On the left you can just about see part of the mechanised coaling facility, the rear bucket of an old JCB with a bright yellow paint job.
Here's the Sentinel back on it's home track where it used to shunt coal and coke wagons. 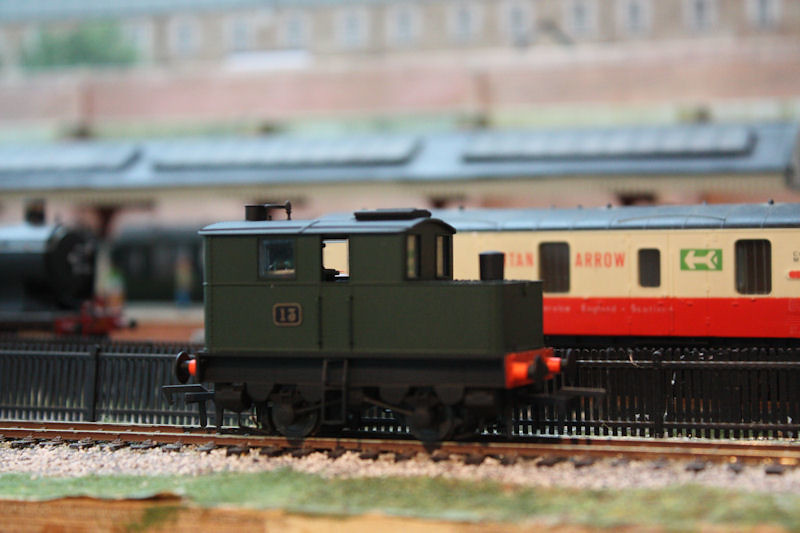 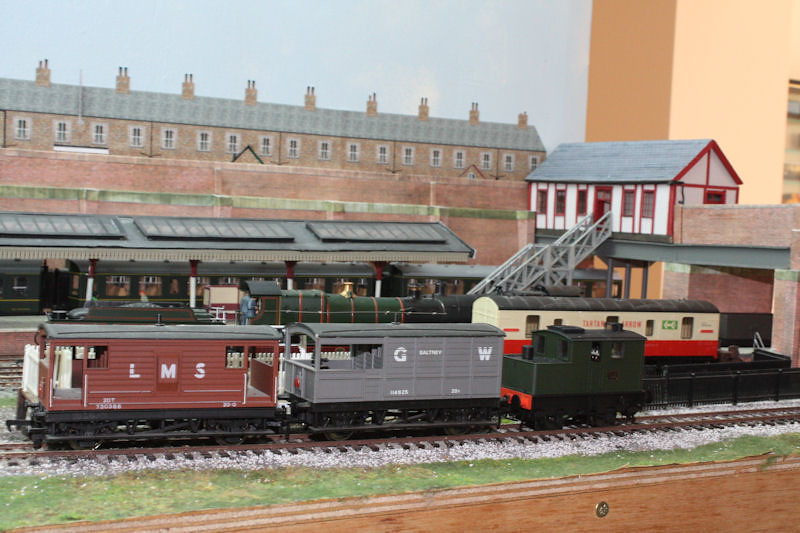 The old gasworks site is now the main loco shed and workshop, if you want to visit, the only way in is a brakevan ride through the tunnel. Also here the gable end of the platform canopy is starting to come adrift. This is canopy Mk2, mark 3 is obviously needed, hopefully we won't get to Mk4. 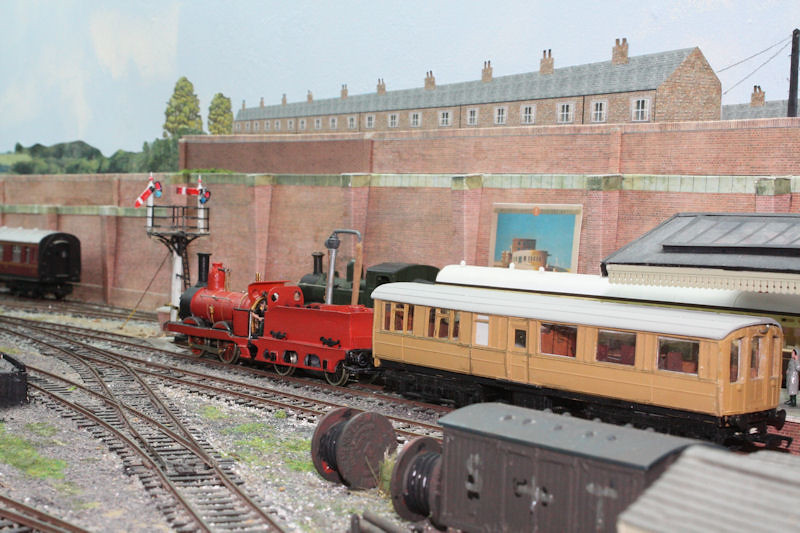 Moving the camera again and looking back to where we were Furness No20 on another visit has just got the clear from the station starter. It's running the other way round on this visit. And finally for now the same scene from the top of a nearby block of flats. 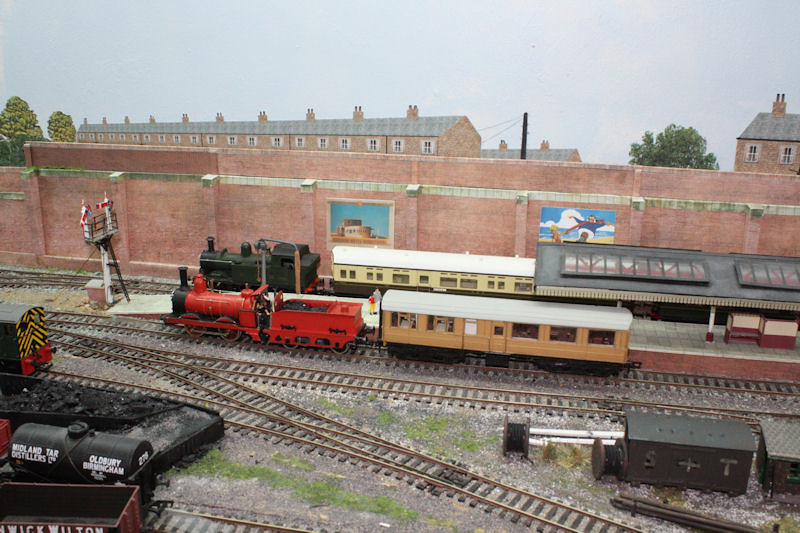 In the foreground the Signal and Telegraph boys have found a can of aluminium paint and staked their claim to the old van body as their store. Beyond the retaining wall is an area of terrace housing. These are courtesy of Mikem's Wordsworth downloads. The row at an angle tapering into the distance involved a little reverse engineering to Mike's PDF to get an editable format to which I could apply some prespective effects. It wasn't really worth the effort as they print out good enough to rescan to get the same editable file.
This isn't to say the layout is anywhere near finished. I'm starting to accumulate figures to populate the scene. I would like to get sets in different historical periods, so that I can stage various events with people in costume, "Victorian Evenings" with No20 visiting, 50's Mystery weekends period cars, DMU looking brand new, I've already got a Miss Marple to sit in the corner of one of the platform benches and typical 50s detective in Gaberdine Mac from Dapol's set of figures (they were bang up to date when they first came out). So keep watching

Edited to insert first picture and its text. Picture went AWOL when uploading.
Growing old, can't avoid it. Growing up, forget it!
My Layout, My Workbench Blog and My Opinions
Top

wow, this is a truly amazing layout! time to just sit back and enjoy your master piece now

35011 GSN wrote:time to just sit back and enjoy your master piece now

No chance, I went into the works for a quadruple re-tubing 8 years ago. I did a deal with the great shedmaster and the other fella that if that was a success I wouldn't be going anywhere whilst there was a layout to finish. Hence all the little bits that still need finishing off or upgrading

Glad to find a lot of people like it.
John W
aka Bufferstop
Growing old, can't avoid it. Growing up, forget it!
My Layout, My Workbench Blog and My Opinions
Top

I do like this picture along with all the others!

It's the little details like retaining wall at the end by the buffers and the slightly disused footpath over railway with the scenic backdrop completing the picture!
“Sir, Sunday morning, although recurring at regular and well foreseen intervals, always seems to take this railway by surprise.”

Gives me inspiration to do my scenery... just hope I can get near yours.

Meanwhile, I've got some more digging to do: Broken sewer, but can't afford hundreds of dollars for a drainer, so need to stick at digging in ground like concrete.

The picture in the background is fab! Nice to see everything cluttered just like a preserved railway, you have really caught the atmosphere there

Now where is my comission of FR 20?

Once again, great job and i cannot wait to see the Victorian events (chance to run 20 and 3440 double headed or something!

Geoff, have to admit that the real brilliance of the artwork is down to software that allows you to stretch and compress an existing image until it looks right, in this case it was PaintShop Pro. I've stuck with it since it was a bit of shareware running on Windows 2.2. Closer examination reveals that the chimneys have no sides, but no one has spotted it and I've tried to make everything look as it should when I'm standing in the middle of the horseshoe holding onto a Gaugemaster hand held. I've tried to break the whole thing into three scenes, branch station, canal viaduct and former junction station without resorting to tunnels. I'm amazed by the number of 1/76th size railway contractors who drove tunnels straight through the only hill on a flat plain.

The little hillock and the barn at one end, and the hill and footpath bridge at the other, make it difficult to see the entire route at one go, as it would be fairly obvious that a full length Pendolino could have a cab in each station block at the same time.
Better go now I'm fending for myself for a couple of weeks and the fridge is running out of things that a type2 diabetic can eat

John W
aka Bufferstop.
Growing old, can't avoid it. Growing up, forget it!
My Layout, My Workbench Blog and My Opinions
Top
Post Reply
183 posts