Post pictures and information about your own personal model railway layout that is under construction. Keep members up-to-date with what you are doing and discuss problems that you are having.
Post Reply
21 posts

Right then where do I start well quite simply I made a very big mistake a few years ago when I sold off my oo guage railway which was on a 18x8 set up in my shed ARGH should never have sold it.
Anyway enough of that so I decided I needed something to do in the evenings and sundays when I cant go sailing my radio controlled Boats,so a N Guage layout was in the order of the day,E bay was trolled looking for somethinng suitable locally.A l shaped layout came up but was nfar to expensive but I got it a couple of weeks ltr vastly reduced when it was relisted !!!

Right then of course it would not fit in the space allocated so some modifications were soon needed to keep the mountain scene that was very well done.I must admit that the first ste up was a u layout but not one for doing things by havles I decided to go the whole hog and go for a 3 rail layout with sidings etc

Now I know that a lot of you out there will probably have a dicky fit about what I am about to say next but hey I don care!!!!
There is no set theme or name to this layout and no region either ,it is to me a modelling excersise.

2 More of the same

4 Trying to sort some track out

6 Looking at the part completed sheds and shunting yard

7 Looking at the three levels of track

9 A view of the original scenery

11 The layout so far waiting for some more points,motors,landscaping etc etc etc oh and some rolling stock

Comments good or bad are very welcome as I am a complete novice to this N guage system,guaranteed there will be some very silly questions asked in due course I can guarantee you

Hi Dave, thanks for sharing your layout there as it develops, i for one am very impressed and i like the scenic work, particularly the sheer cliffs. I also like the small river with the line going over on the bridges. Its inspirational to me as my own layout has come to a halt (lack of mojo etc) but you seem to be getting stuck in and doing a good job.

Thanks again for sharing your layout with us.

Hi Dave, its got character hasnt it? I like it. At the first pic I thought "good grief" a bomb had gone off

but the swift transformation was great to watch.

My only niggle is, is that tunnel removable? if not a derailment in there could mean the divil of a job to clear also line cleaning in there would be a pain.

Oh Sugar you spotted the deliberate mistake !!! The access for the tunnel of course is right where the plugs are on the wall ! That did not become obvious to me till I had screwed,nailed and glued everything in place so you can imagine what was said,saying that I can just about get in with a gripper so it is not to bad......I HOPE.
More pictures wioll follow as soon as I have bought some ballast etc

lol, never mind Dave, at least its only single rail and the tunnel isnt "that" long is it? Should be ok.

btw, is it going to be DCC?

Well quite a lot has happened since the last thrilling installment,well baisically I have started again!!!!!!!!
I soon found out that N guage is definatly NOT forgiving when it comes to humps an dbumps not like oo guage.I bought some locos and rolling stock and off I went litterally!! baisically the track was not level enough or smooth.
I went back to the drawing board and was contemplating what to do when a friend sent me some pictures of a 5x3 loayout he was going to put on ebay so after a few phone calls a deal was done and it was duly delevered,he could not believe that I had scrapped the first layout and was going to splice his into mine,he shyould have known better!!!

Baisicallyit wasn a figure of 8 with an outside loop it included some buildings and trees and to me it blends in well into mine yes I still have one heck of a lot of work to do.Yes fair comment many will say have cheated and yes I haev but so what all is fair in love and war.....I THINK

A view of the new addition

Some views of the new scenerey

Looking at the goods yard

Hopefully you will enjoy the trialls and tribulations of my build and learn from my mistakes.
Now the fun begins next stage is going to be the wiring all 23 motors for the points and isolated track signalls etc

Hello Dave,
Welcome aboard, and congratulations on such a good start. Don't worry about the additional Lay-out, most people either utilize advice or eBay bought items to augment their own modelling. Am I right in assuming that the Lay-out is GWR with a name like Penryn? Keep-up the good work,
Kind Regards,
Michael Thornberry.
Top

Hi Michael you are wrong in your assumption of it being a Gwr setr up as I dont have any prefference in what era or whether it e Lms/Gwr/Britrish Rail etc.As for the name of Penrhyn well simple really Penrhyn castle is only 3 miles away from here!!!!
Thanks for all your kind words of encouregement
More pictures etc soon

Hi Penrhyn
I like!
What I would like to do is get into some N guage. Are you able to scribble up a track plan of the new addition (pre-mutilation

) that I could use?
Cheers
Nate
Top

Hi8 kiwinet pmk me your address and it's yours

Right then some more major changes have happenend over the xmas period.I was not at all happy nwiht nthye goods/marshalling yard so it just had to go.The way ninto the yard if you want to call it that did not make any form of sense,not that anything I do does!!!!!!!!!!!!
It did not make sense to me where the access to the yard was,what I mean is it was not comming in from a Station at all and I felt it should have,so up it came had a few glasses of wine and a cunning plan was hatched so to speak.Thye crossover on the left side of the track was done away with and a new Tunnel/town shops was constructed in the time honoured way of a balsa wood frame and light ply top,this has been adorned with soem shops and a few terraced houses a road and some trees,all the cars are Oxford.Some of the landscaping has been done but not yet finished as telegraph poles and some parking spaces are yet to be added.
Right then a passing loop was added to the inside track thus allowing a three platform station,this has allowed me to gain accesss to the goods yard.It was decided to have a turntable for the steam locos so a Peco one was installed,this alas will not be motorised no room for a motor.A goods yard consisting of six rows of sidings has now been allowed allowing the storage of some quite long goods trains.Unfortuntly a maximum of 4 coaches is the biggets rake I can park up in them,but this I can cope with due to some sidings located at the other station so it is not a problem,or even in the passing loop.Due to the new tunnel/town been constructed I can now construct a small town at the base of the tunnel with a park and lake.A new road will have to be built to connect the existing roadway to the new town and through to the Main Station.

the next three pics are of the new tunnel and shops 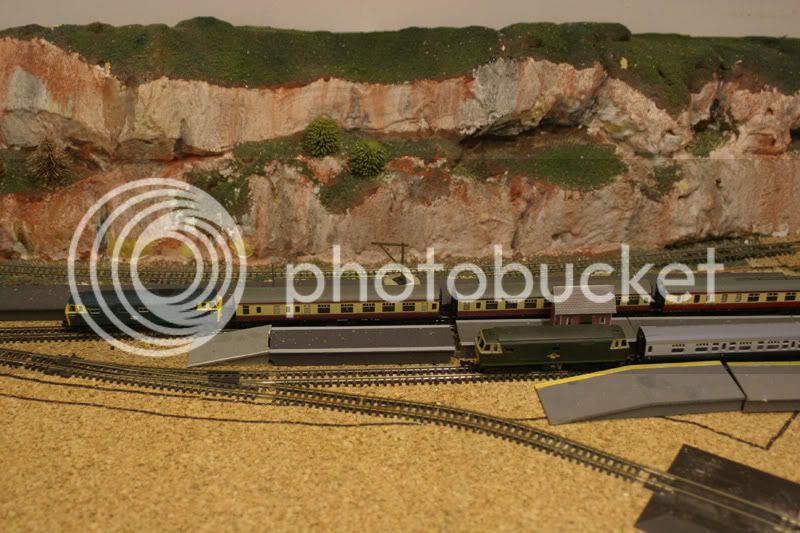