Post pictures and information about your own personal model railway layout that is under construction. Keep members up-to-date with what you are doing and discuss problems that you are having.
Post Reply
1979 posts

Cracking stuff, I do like that double under bridge section. Some mega structures as well.
I assume these are made from foam board ?
It reminds me of Andrew Fothergill's work which has been recently brought back to the surface.
Shame Photobucket screwed up the stills, at least the YouTube videos are still available.

I’m the opposite, I like to sit and watch the trains. Unlike today, chasing the derailments!
My YOUTUBE channel - Bramley model railway
Top

Why don't you embed your images in this thread? Just get the bbcode from flickr and paste it here like this: 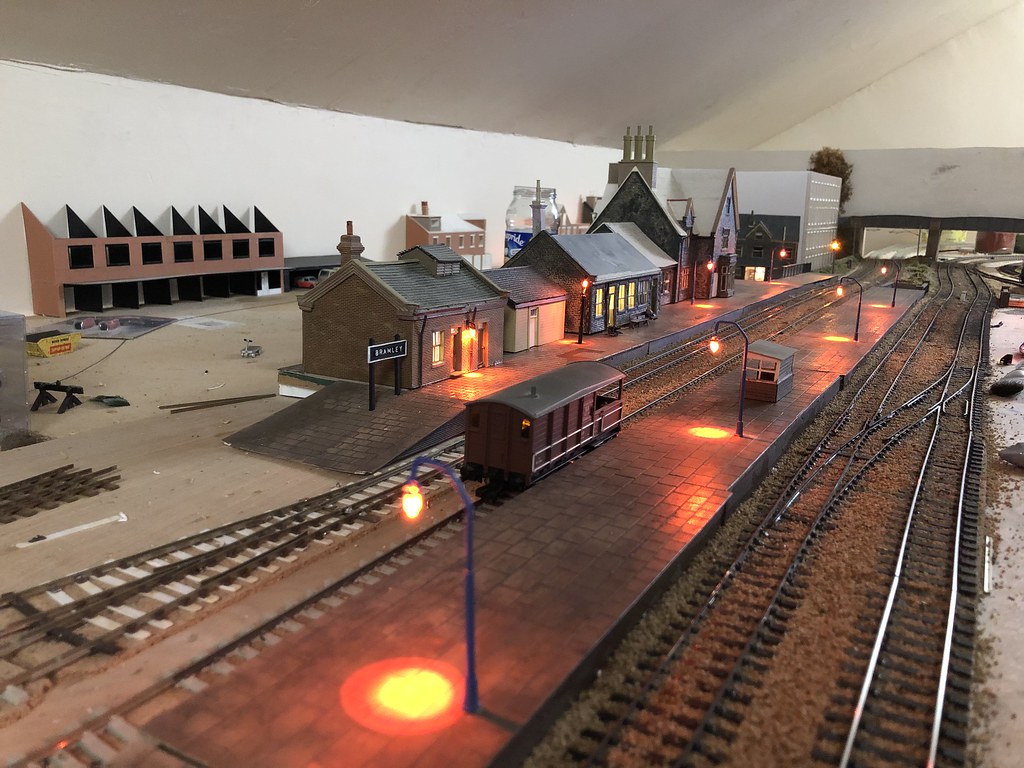 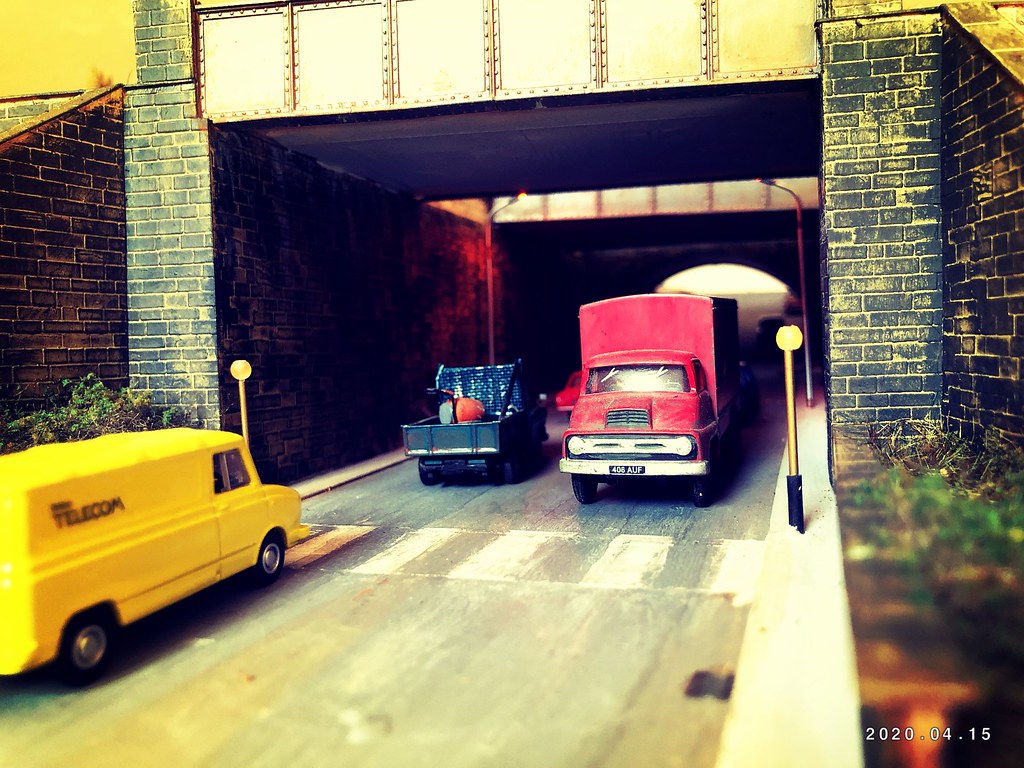 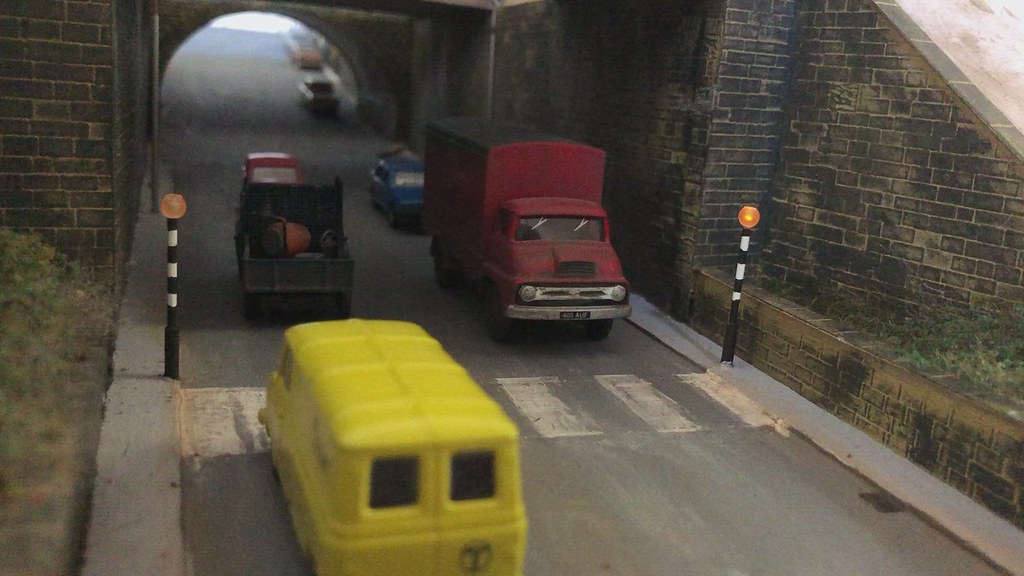 Tried and failed, tried doing from my phone and after 5 minutes I gave up.
My YOUTUBE channel - Bramley model railway
Top

So on Flickr on my phone I select the photo I want, click on it, then I press the curvy arrow button then ‘copy link’

I then go here: https://tools.sportscard.trade/

Scroll down to ‘Get BB code for Flickr’ or something like that. Paste your photo link here and click ‘get code’. This will then generate the ‘BB code’ you need. I copy this and paste it into my forum post.

It’s a bit long winded but it works and it’s free.

Lovely modelling by the way. I really like how this is coming along.

m.levin wrote:Tried and failed, tried doing from my phone and after 5 minutes I gave up.

That you can attempt to do it on a phone is a bit of a miracle. I only ever look at websites on my phone, for working on them I see a tablet as a minimum, and even then it can be a bit risky, (ask Stainsacre, I think he may have forgiven me by now!)
Growing old, can't avoid it. Growing up, forget it!
My Layout, My Workbench Blog and My Opinions
Top

The internet is really bad here but I get amazing 4G. So I end up doing most stuff on my phone just out of convenience. Otherwise I agree with you.

To get the BBCode from Flickr, this is what you do:
1. open the photo in Flickr
2. click the 'Share Photo' icon in the bottom right - this opens a popup
3. click 'BBCode' link and select size - I use 'Large (1024 x 768)'
4. copy the link now displayed in the popup
5. simply paste it directly into your post
No need to use any other tool, and step 3 will be preselected for you next time you do step 2 on the next photo.

I appreciate it might be a challenge on a phone, but takes less than 5 seconds on a PC

dan8400 wrote:The internet is really bad here but I get amazing 4G. So I end up doing most stuff on my phone just out of convenience. Otherwise I agree with you.

Dan if your internet is bad, look at getting a 4G Internet dongle or tethering to your 4G phone. My wife's an examiner and there are times of the year when she has to be on line, whatever the complications. One year we were going to be staying in a converted signal box near of Appleby. We used a 3G dongle connecting via the mast in the village and it was far better than the owners ADSL service.
Growing old, can't avoid it. Growing up, forget it!
My Layout, My Workbench Blog and My Opinions
Top

Its been a while, last March I was placed on furlough, hoping that work could start on our extension this was put back, so I used that time to get some modelling done, but during that time we had some nice hot weather, which made working in the loft difficult. After about 5 weeks I returned back to work, on my first day back I was informed that my job role would change, this meant working more hours to reach my targets. At this point the extension work started so things have been very busy, which eats in to the loft time.
Now the extension is 95% completed and work is starting to level out, I still have loads of work to do around the house, but hopefully I can get some loft time in.
Whilst sanding and painting it gives you time to think, so I started to think about the next steps for the layout. The scenic isn’t going to change, so this will be done as and when, but I have started to think about the control side. I currently control my layout from my PC and have automatic running set up, as I just like to sit and watch the trains. I have added short circuit protect to the layout, breaking the layout up in to sections, this way if I get a short, from a train derailing on points and so on, it will shut down sections and not the whole layout, I have liked this up with some feedback that highlights on the RR&Co software which section has the short, I also added a timer that if the short isn’t sorted and a reset button on the screen isn’t pressed, then it shuts the whole layout down, just as extra protection.
But I have found that when I have a short at the other side of the loft or in the hidden section, I have to dart across the loft to press the small reset button on the screen. So my thoughts are to add local push buttons around the layout, which will do the same as the button on the screen, I have been looking at buttons that look similar to the EWS buttons found on locomotives, but they are not in the right price range and not that easy to find, so I may have to fabricate something.
I have also been thinking about making mimic panels, I have some feedback/input boards that communicate with the loconet, so I have been playing about with push buttons to switch points, I have ordered some RGB metal buttons so I can make it all look pretty and then using the built in point motor switch, to feedback to the mimic panel the direction the point is thrown. I then also thought about using the LED outputs on the BL168 detection boards to light up occupied sections. I also plan to add buttons to trigger the layout lighting and activate the loft lighting, that I have installed that simulates sunrise and sunset. The thing that’s slowing it down is what to mount them on, MDF, plastic, metal and how to mark up the rails/lines and numbering/lettering, painted, vinyl stickers, etching?
My YOUTUBE channel - Bramley model railway
Top

If your question is about mimic panel, what I did on my N gauge layout was to draw something on the PC with all layout features (tracks, legends etc.) colour coded, and then print it off on A4 paper. I then laminated it (using the wife's laminater!) and stuck it onto a piece of plywood for mounting wherever. For holes (for switches, LEDs etc.) I used a punch to cut the hole in the laminate, lined up with drilled holes in the plywood.
Old N layout
0-16.5 workbench
Micro 0-16.5 layout
Top

I'll have to read that later, this is just a flying visit for mail
So I'll have to wait to see what news is in that latest posting.
Good to see you're still fighting the plastic & steel.

I advocate aluminium sheet for strength, with a printed sheet on top and covered with perspex. It just means that you can disasemble later and replaced the paper print if it changes or fades.
https://www.newrailwaymodellers.co.uk/Forums/viewtopic.php?f=22&t=44849&start=195