Post pictures and information about your own personal model railway layout that is under construction. Keep members up-to-date with what you are doing and discuss problems that you are having.
Post Reply
187 posts

A Sketch Map of the Ffrwd Area.

This is the "Fictional" history map. 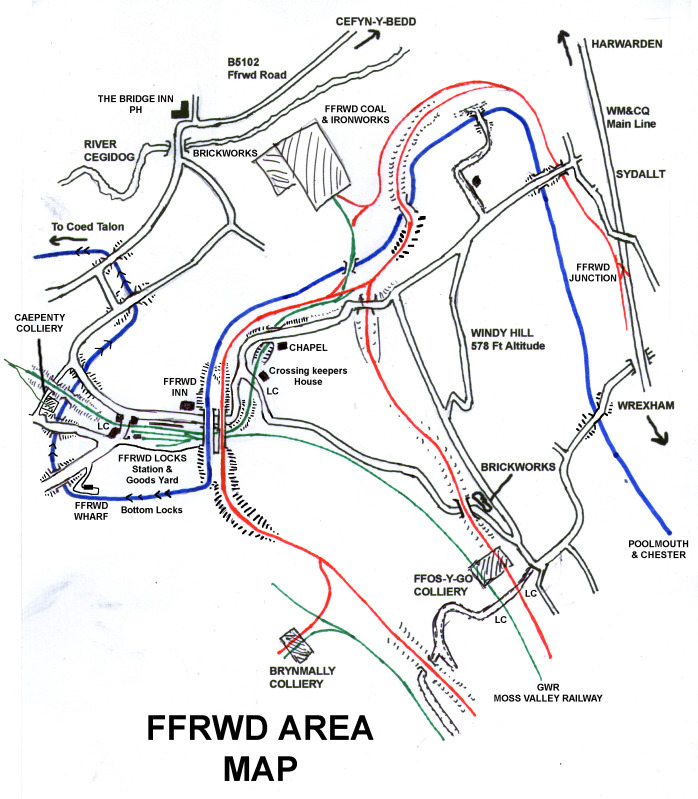 The canal construction started in June 1796.

Llanfynedd Quarry Basin (and reservoir) to Ffrwd, and Gwersllt Wharf to Wrexham Town Basin Opened in 1799.

Abandonment of the Wrexham to Trefor Canal Plans led to the "temporary" tramway (Opened in 1808) becoming permanent.

This was (between Ruabon and Wrexham) aquired by the North Wales Mineral Railway in 1844, and converted into part of the Shrewsbury and Chester Railway's main line. Opened 1848.

Ffrwd Ironworks and Colliery was worked from Pre 1796 until 1990.

Brynmally Colliery and Brickworks was worked from 1770 until 1960.

The GWR and LMS Joint Railway from Ffrwd to Coed Talon closed "temporarily" after a landslip at Ffrith Viaduct in 1952. This closure was quietly made permanent, Crosville Motor Services continuing to run a "replacement" Bus service. This took the busy Ffrwd Level crossing out of use.The local authorities had been campaigning for this to be replaced by a bridge. The road had become busy, and the frequent closing of the gates to road traffic during shunting, etc. were causing problems. This caused some problems for the railway, limiting the length of train that could be dealt with at Ffrwd. A lot of the Ironworks (Later known as the Steelworks.) traffic was afterwards to use the LNER Ffrwd Branch, except for the times this was closed for maintenance. (The landslip was never repaired.)

A preservation scheme for the Moss Valley Railway failed, and the line was lifted after 1990.
Last edited by sarah on Wed Jun 06, 2018 2:18 pm, edited 4 times in total.
Regards

Cant believe I haven't posted yet on this little gem.

Excellent attention to detail on the buildings & scenery Sarah, so much in a small space without looking overcrowded. The weathering of your stock is very impressive & doing it by hand too.
Regards,
Steve

I hope to do some more later on Ffrwd. I have been a bit busy with "other things" for a bit.

I have never used an Airbrush. I really don't have the room for a spray booth, and outside tends to be wet as well. I manage OK, though.
Last edited by sarah on Tue Jul 16, 2013 10:32 am, edited 1 time in total.
Regards


As last year at this time, I would like to draw draw peoples attention to the Anniversary Today, Saturday 22nd September, of the disastrous explosion and fire at Gresford Colliery (Near Wrexham.) in 1934. This claimed 266 lives. Coal mining has always been a dangerous occupation, as shown by the many accidents and disasters over the years.

A relative of mine was amongst the dead at Gresford.

There have been some model railway wagons made in the livery of Gresford Colliery, one of these was made by Dapol (now based in Chirk, the other side of Wrexham from Gresford.) for West Wales Wagon Works. 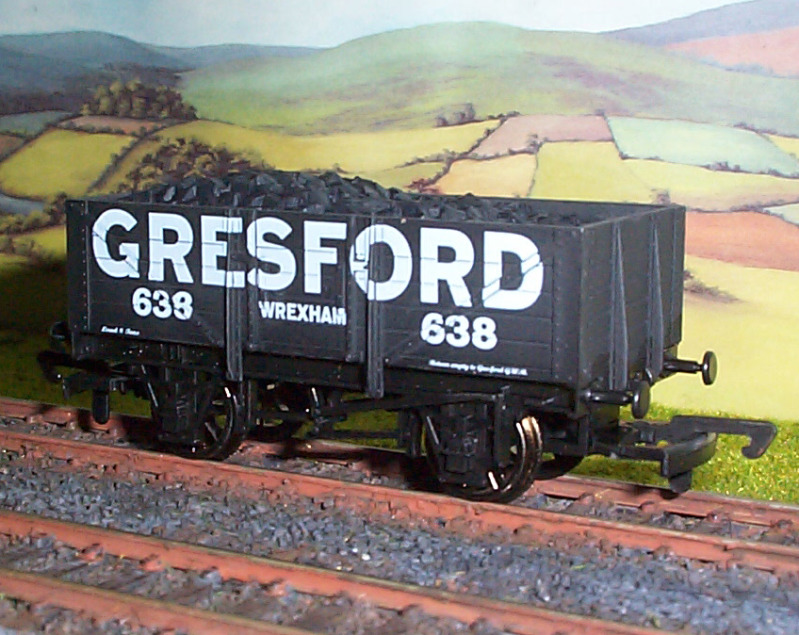 As bad a name as unions get these days when they mis-behave, this is why they were needed, I guess...”

A public inquiry took two years to investigate the disaster. The report's appendix lists names, ages and occupations of all 265 men who perished - the youngest was 15-year-old Charles Harrison and the oldest was 68-year-old Edward Wynn. Like the majority of victims, they were entombed in the workings of Gresford Colliery, where they remain, remembered now on a memorial and in the lines of a folk song:-

"Down there in the dark they are lying.
They died for nine shillings a day.
They have worked out their shift and now they must lie.
In the darkness until judgement day."

Nearly three years later, the colliery employers were found guilty of breaching a total of eight coal mine safety regulations. Their punishment? They were fined £140. In other words, 1 weeks wages for all those who died nearly paid the fine!

It is also said that the majority of the bodies could have been recovered, but the mine-owners refused "on safety grounds". The opinion seems to be that the mine-owners wanted to hide the true state of the mine. Inadequate ventilation for example. A passage to help in this was meant to have been constructed, but work on it was only allowed by the management when there were "spare" men not needed in winning coal. It is no surprise that profit came before welfare!

The mine actually re-opened, except for the "Dennis" section, which was walled off, and was worked until 1973.

The original "monument" to the dead was the complete headgear to one shaft, all that was left after the site was cleared. It was visible for miles around.

When walking from Wrexham General Railway Station out to Gresford to visit family, it was always a lift to see the headgear come into view, as it meant I was nearing journey's end.

It seems that this was in the way of the industrial estate, so it was demolished, just the wheel being mounted as a new memorial. It is not the same.
Last edited by sarah on Wed Jun 06, 2018 2:22 pm, edited 4 times in total.
Regards

I am at present re-modelling the main goods siding at Ffrwd.

I had become aware of a serious limitation of having the Cattle Dock at the end of the siding with the Coal Merchant's facilities between the dock and the "main line".

The end of the siding would be out of use if there was a wagon being unloaded at the Coal Merchants.

(Though it seems that there was at least one place with a similar arrangement in "real life"!)

The original idea of installing a new point on the loop to serve a slewed connection to the Cattle Dock seemed a good idea, and I did cut the siding and loop tracks to install the point.

In the end it became only too clear that this wouldn't work.

I did install a PECO trap point at the Wrexham end of the loop though. The rest of the loop track was re-laid using some left over track and some pre-wired fishplates to provide some extra feeds.

This has involved the demolition of the End Loading and Cattle Dock, and the Coal Merchants coal bins and office.

The siding has been legthened slightly with the removal of the End Loading Ramp, using some more left over track and some pre-wired fishplates to reinstate the feed.

A new Coal Order Office has been made from an old Airfix Coal Office. This has new windows, door, roof, and chimney. Mainly spare parts from the Wills Goods Yard Store Kit, with Wills Slate sheet for the roof. Signs have been made on the computer.

The Coal Bins have been re-built from the original parts. A new "bagging platform" has been constructed from the staging from the Wills Goods Yard Store Kit, with Wills Planking sheet from the Level Crossing kit for the platform, Evergreen Styrene strips for the roof supports and other planking walls, and Wills corrugated sheeting sheet for the roof. Bagged Coal is Merit/ PECO Modelscene Coal Bags. Spilled coal is shot blasting compound. Scales are scatch built, and various figures are in use (Langley and Merit/ PECO Modelscene /Slater's.)

Interior. (This is stuck to the baseboard, and the building slots over the top.)

Together with the newly re-constructed Coal Bunkers.

With the Mk2 Signage.

With more added...(The "wrong way" around to shew the track side.)

Here is the revised track plan.

A new loco for Ffrwd. Some work required.....

Thanks again for the comments.

A Diesel on Ffrwd. My favourite type, in the original Plain Black, with the best BR emblem. (My opinions.

The cab steps are still to be fitted. As a "brand new" loco in the 1950s, the weathering will be light...

The underside of the Aqueduct...

The "other" abutment of the Aqueduct...

The "Low Bridge" warning signs on the Aqueduct...

The Standard 4 Tank with crew and weathering, etc. (Some steps need re-attaching.)

The 93XX GWR Mogul with crew and weathering, etc...

There is more "constructional" information on the "Workbench" thread, see below for a link.
Last edited by sarah on Wed Jun 06, 2018 3:20 pm, edited 4 times in total.
Regards

Must have commented at sometime.
The understanding of local history & geography kind of make
this quite a special layout.

The body is held on by 5 (Five) Screws. 2 are "hidden" under the side tanks. A thin shaft cross head screwdriver is required to slip down between the side rods and valve gear!

The speedometer drive would need to be unscrewd from the crank end. (The linkage on my S/H model was already missing, so no problem.)

The Injector pipework is mounted on a bracket that is a tight fit over the chassis.

It took me a while to work out how to free the pipes, as they are attached to the body

(I took a knife to the bracket sides and removed a sliver from the bracket both sides of the frame to make it easier to get back together. I also glued the bracket to the floor of the cab to hold it in place!)

The cab back and bunker is a seperate moulding, held onto the "body frame" by two screws. The rest of the body, boiler and side tanks is held on by 1 screw in the "firebox" area.

I have painted in the backhead detail, and the Cab floor.

The Driver is a Tri-ang figure. The Fireman is from the Dapol (Ex Airfix) Railway Figures Set.
Last edited by sarah on Wed Jun 06, 2018 2:49 pm, edited 4 times in total.
Regards

Dad-1 wrote:Must have commented at sometime.
The understanding of local history & geography kind of make
this quite a special layout.

I really must get out to Ffrwd again, and take a camera this time! It is a rather special place.
Regards

I have "discovered" that there is another 1950s Wrexham Area Railway with the Shropshire Union Canal (That wasn't built) represented.

This is a might-have-been Wrexham Mold & Connah's Quay (LNER) route. A work in progress.

This goes along with "Wrexham Hightown" the O gauge model of a Loco-shed by Chester MRC .

The O gauge layout “Wrexham High Town” has been on show to the public several times this year, as we went to press final preparations were being made for the layout to appear at this year’s Wigan model railway exhibition.

Everything is working well and Andy has finished the wiring. Two new locos will appear at Wigan; the Dukedog and patriot Caernarvon 45517 (coincidence see ‘meet the member’).

Here is a link to an OS map (Streetmap.co.uk) of the Ffrwd area.

The arrow shows the supposed location of Ffrwd Locks Station.

Those are some great photos keep up the great work
Great Western Modeller for my sins
My Blog http://brookescastle.blogspot.com/
Top

The Ffrwd Branch of the Ellesmere Canal...

I have found these sites interesting, they cover the history of the canal scheme that the Canal at Ffrwd Locks would have been part of...

A major resource discovered via another forum user...Thanks...

Here are some maps around the Ffrwd and Wrexham Area...


The Ffrwd Branch (Moss Valley Line) leaves the top of the map from Moss Valley Junction...

Clicking on the map takes you to the site where the image can be enlarged by clicking on it... 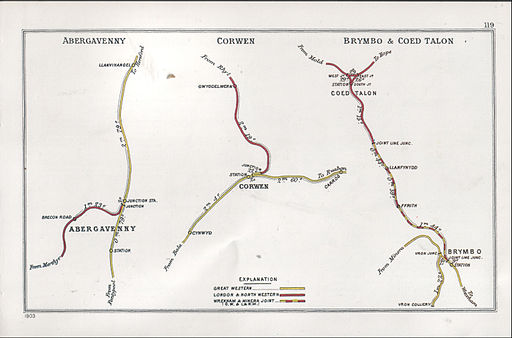 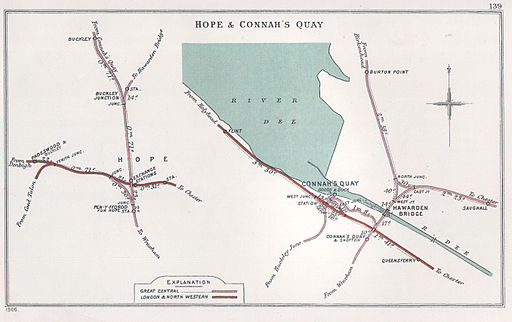 Some recently worked on wagons for Ffrwd Locks...