Discuss model railway topics and news that do not fit into other sections.
Post Reply
18 posts

I'm on the lookout for three or four small carriages to match up with a Hornby 0-4-0 saddle tank loco. The smaller the better, similar size to narrow gauge, but for 00.
Era...well, the latter days of steam. Region...doesn't really matter, they can be resprayed and altered.

4 wheel coaches are unlikely to have survived towards the end of steam, even on some backwater line they didn't last much beyond the 1930s. However:

There are the ratio GWR 4-wheel coaches These are plastic kits, they go together quite easily. For your latter days of steam era the livery would probably be just a dark brown rather than the attractive but complex livery displayed above.

Through gritted teeth I shall suggest the Hornby 4-wheel coaches, although they are very short, they are too tall, not really based on any prototype, and generally look rather toy-like.

Those are the only readily available 4-wheel coaches that I can think of, of course there are many kits of more specific prototypes out there but they are often brass kits.

There are Hattons's 4 and 6 wheel coaches, but they're not available yet, and won't be available until next year. Again they are fictional but they're already looking much, much better than the Hornby offering.

Moving onto bogie coaches the shortest rtr bogie coach I can think of is the old Tri-ang GWR cleresory stock:

Fairly prototypical and again, likely to be in all over brown by the end of steam.

Although they had a tendancy to take on a rather banana-shaped appearance.

I shall end by extolling the virtues of scratch-building your own carriages - you want a couple of small 4-wheel coaches that ran on a particular branchline on the Isle Of Wight, just go and build 'em:

Thanks ever so much, a very informative reply...much appreciated.

The Hornby ones (as mentioned above) are these 'little darlings'.

These two are supposed to represent the Southern Railway.

There are other coaches in different colours. I personally like them because they seem to fit in to the scene I wish to portray. Another main reason I like them is that my grandchildren (the youngest is four years old) can handle them easily.

The image of the three short Triang bogie coaches above gives ample evidence of why they must be purchased with care, they were renown for going banana shaped, especially after exposure to sunlight. I think any non bogie carriages that survived into BR ownership were being used as non passenger stock. Tool vans for works trains etc. Doesn't stop me running them though. Fitting smaller rather than carriage wheels will offset the height problem, but may need a tweak to the couplings.
Growing old, can't avoid it. Growing up, forget it!
My Layout, My Workbench Blog and My Opinions
Top

If you want them RTR, then waiting to see how the Hattons generic four and six wheelers come out might be a good move. What you want is strictly fictional, for a start passenger services could not be operated by an 0-4-0 on the national network, so the fact that these coaches will be fictional is all of a piece.

Chopping down old RTR and kits has much to recommend it too. The old Ian Kirk kits for the Gresley 51' stock are another kit source readily modified in this way, the external beading serves as cutting guide lines, and a razor saw used with a mitre block allows accurate 'dissection' for reassembly of the body sides with the compartments required within the length you aim at. Cutting a coach bogie in half and sticking one under each end supplies the running gear. Or if you make an extremely exclusive one compartment coach, a wagon chassis will do...

And the expensive solution which no one has mentioned. Borrow the coaches from Hornby's new Rocket set. You won't find anything older, smaller and yet authentic in RTR!
Top

Triang suburban coaches are reasonably short (a lot shorter than a MK1 coach) and represent the sort of coaches that were around up to the early sixties when they were wiped out first by the introduction of DMUs then Doctor Beeching . They are cheap and don't suffer from warping but you'll need to change the wheels .http://www.hornbyguide.com/item_details.asp?itemid=1057

I think I've found the ones I want..

For an excuse (if rule#1 isn't enough) to run 4-wheel coaches behind an 0-4-0, why not model a light railway? Perhaps a stone or coal-hauling line which branched out into offering a local passenger service. Secondhand coaching stock retired from the main line, along with an array of small locos, would be ideal. You could have a few 4-wheelers tailed by a van or two with a brake van bringing up the rear. This sort of thing is more commonly done in narrow gauge but there were plenty of standard gauge lines feeding into the larger network. Perhaps there are reciprocal running powers with the main line for when you want something larger.
Once an engine attached to a train, was afraid of a few drops of rain...
Top

Have a read of this 4MT - Improving the Hornby 4 Wheel Coach.
viewtopic.php?f=1&t=50754&hilit=4+wheel+coach#p621924
Seating, passengers and lighting with a capacitor so the lights stay on when the train stops. EVEN ON DC! 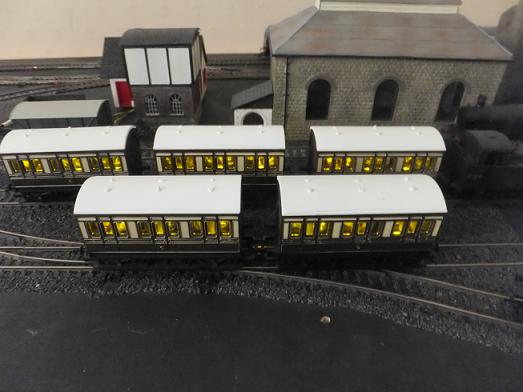 I'll just add, be careful when you buy them as they come in 2 different cream colours.

One has a more yellowy cream colour than the 2 pictures which we have both posted, which are the better colour cream in my opinion.
Thanks
End2end
"St Blazey's" - The progress and predicaments.
Welcome‎
Planning
Building
St. Blazey's Works & Depot thread
Top

Lots of those on ebay for between £5 and £10 each, I've recently bought a couple as they fit in well with my small layout. I haven't done anything to the interior yet but sprayed the shiny white roofs grey today.
Dave
Top

Gentlemen...you are all absolute stars, every one of you.
Thank you all so much for the kind comments and advice, I appreciate every word.
Once the forthcoming move is completed, I can make a start on building my little end to end layout, (only 72" x 18") but it'll keep me occupied for a while.

The coach is made from the sides od an Alphagraphics IOM tramkit (or it might be Snaefell) on a pair of Ratio diamond frame bogies (you could put a shorter version on a wagon chassis). The loco is a Bachmann "Greg", a faceless Percy with built in DCC from their DCC starter kit. The saddle tank is a section of PVC waste pipe, the other bits came out of the scrap box.
Greg's the one that got them in trouble with Hit Entertainments for using Thomas tooling to build a mainstream model. Hornby got away with it by pointing out that Stepney benefited from the tooling of a genuine model of a Terrier, no one had ever told them that Wilbert Awdry based his locos on real examples from British railway companies.
Growing old, can't avoid it. Growing up, forget it!
My Layout, My Workbench Blog and My Opinions
Top

I must admit, running my Peckett finally, it really is the tiniest loco. I think only the Ruston and the the Wickham trolley may be smaller although they have trucks connected so are probably longer. Even vans and brake vans are taller and my A4's tender is longer than it too.
Perfect for a small layout.

4MT wrote:I think I've found the ones I want..

Alex
"I love the way you call it Art, When you never even use your Heart, and I just wanna tear you Apart"
Top
Post Reply
18 posts