Discuss model railway topics and news that do not fit into other sections.
Post Reply
162 posts

Lysander wrote:Hmmmm.....
Tell that to the Saudis....
Tony

You've heard about Man U being sold then.

As for the size of 10 x 5 feet, I think my layout is bigger. No wonder as a single modeller wth rubbish skills it's taking me ages.

TBF i don't see much ridicule of the people doing the lay-outs unlike the "scottish programme" although it has to be said a programme maker would be a fool to not focus on a "character" if he falls into their lap. I thought the bake-off analogy by GWR-fan made earlier was a good one - i was sort of hoping for a masterchef. The two hobbies are comparable. You can't tell me cooking a 3 course meal requires more skill than building a lay-out or should be taken any more seriously. okay so railway modelling is more niche than cooking, but its not on prime time bbc1 but channel 5. think they've missed the chance of getting a loyal albeit smallish audience by going for the floating viewer with the silly film set challenges etc.. instead of making it slightly more serious. End of the day everyone has freeview at least now and if you're someone with no interest in railways its highly unlikely its gonna take your fancy with 200 other channels to choose from.
Top

Channel Five is doing the hobby proud at the moment, we have TGMR Challenge, Paddington 24/7 and Walking Britains Lost Railways. Although it's reality TV , Paddington isn't frightened to get real technical' showing scenes of the cutting in of a replacement crossing, and replacing sections of the catenary. You should have seen my wife's face when they showed the Thermite welding of the new rails!
Don't forget, we aren't the best judges of these programmes, we are looking from the inside. I'ts the reactions of Joe Soap and particularly Mrs Soap to what they see. It's a pity the woman coming off the delayed train saying it's a nightmare, hadn't seen the whole programme before she vented her anger.
Growing old, can't avoid it. Growing up, forget it!
My Layout, My Workbench Blog and My Opinions
Top

I managed to watch last nights repeat. Great layouts and some cameos that made me laugh heartily. The figure using the jack hammer wobbling like crazy powered by what looked to be an electric toothbrush.

Brilliant.
Dirty Den lying face down in the river was good, but to add his dog next to him on the bank really completed the scene!

What I didn't like was the first minute or so with the 2 presenters. Cringeworthy to say the least.

As for the scratchbuild challenge, well to me it seems a bit weird. I for one don't usually find items then decide I need to make something from them, rather it's the opposite way round. I want to make something so I find items to use.
There was one case where I did find an item and think "this could be used for balustrade". 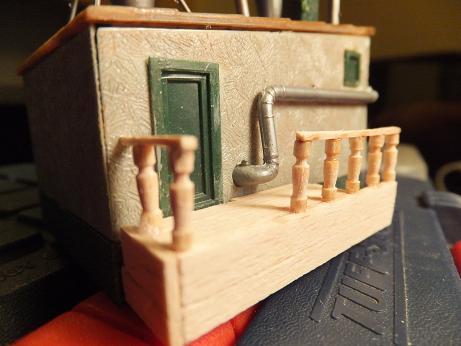 Although saying that the half buried exploded bomb was ingenius.

Yet the same pipe used by another team for bridge supports that didn't support anything was a wasted opportunity to say the least.

And I could swear I've seen the contestant chap with the white hair, sideburns and red braces before! I just can't remember where.

HarryR wrote:The team leader, of Railway Video Division is SDJR7F88 on Youtube https://youtu.be/0nSFiGyfTGA Not surprisingly their winning display reflects elements of his own modeling activities.

I don't think i quite understand the rules on how much you can prepare. His behind the scenes video shows a board with a fair amount of track laid on it....

It was a cool layout though.

You mean the WWI setting? I think he was just lucky they picked a topic, where he could use his existing interests as the basis of his response.

The behind the scenes videos, on his Youtube, that the team shot might go into greater detail
Top

End2end wrote:...And I could swear I've seen the contestant chap with the white hair, sideburns and red braces before! I just can't remember where.

Overall another enjoyable episode.
Thanks
End2end

He was Charlie, one of the team leaders on Channel 4 'Biggest Little Railway' 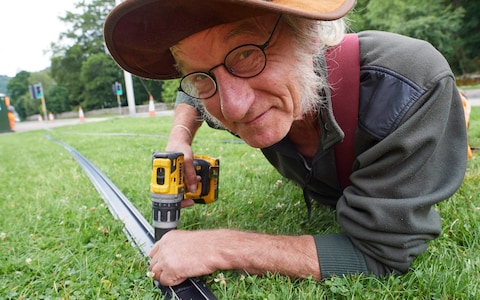 I think that this chap, Chris, did the pneumatic drill with the toothbrush:- 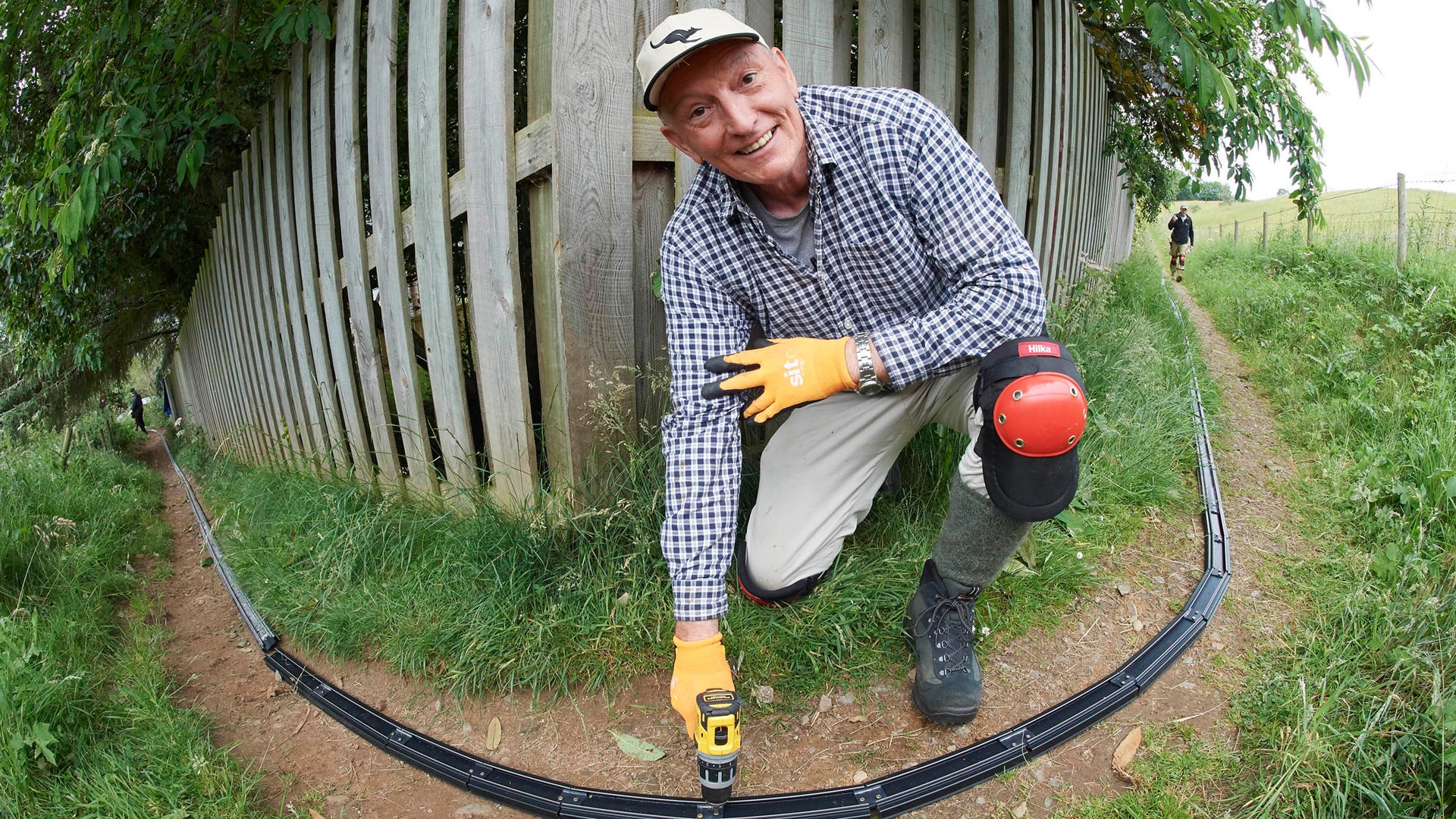 Well spotted Susie. In fact all the Ninjas were part of the Biggest Little Railway and three of the Who team too. They did film a whole backstory of how we got together on that show but they decided not to include it. You may have noticed the quad bike going backwards into the canal which was a nod to an incident on BLR - what was not so obvious was that the canal was made from a section of the Scottish track.
The road mender was a fun thing I came up with - the downside was that I had to remove the battery operated toothbrush each day as it was the one I was using.
We had a great time filming the show and in the end the right team won.
Top

Watched it for the 1st time tonight. Stuck it out till the 1st break. Turned it off. My goodness...
Top

kevin sharpe wrote:Either i am getting use to it or it is improving enjoyed this weeks steampunk layout a lot of fun and why not
kevin sharpe

It was a bit better.
The team that most tried to build an operating railway, as opposed to using the train as a pointer to where the next animation was, got into the most trouble.

The team that best matched the breif won again, they managed to convey Santa from the desert to England and on to the North Pole. Their animations worked, and the forced perspective with the same train in N showed some Innovation. The Steampunks failed to exploit their own possibilities and paid the price of including too many novices. I think the producers have pulled it off they have a format that hasn't upset too many modellers (at least not here) and it doesn't dumb down or try to over dramatise the time element.
Growing old, can't avoid it. Growing up, forget it!
My Layout, My Workbench Blog and My Opinions
Top

The forced perspective of the N-gauge train might have been good if we could have actually seen it - it was there for what felt like a fraction of a second! The OO-model disappearing into the tunnel followed a few seconds later by the identical N-model appearing higher up would probably have made a great moment if the programme editor had let us see it as a continuous shot.

My disappointment with this programme is the amount of 'padding' (panorama shots of outside of the venue, talking heads speaking drivel, people running around in the room with some model part in their hand) then when you finally get to see the finished displays at the end (the real interesting part for experts and newbies alike) the camera/editing shows film of the spectators looking at the layout, but we don't get to see much of the layout ourselves!

Surely if the viewer isn't interested in the subject, showing generic crowds of people isn't going to inspire their interest in the programme?

The driver's eye view doesn't show anything and the closeups of the trains don't work well on television, so why not have some fixed, distance shots so you can take in all the action, and dwell on the scenes? For me, the appeal of model railways is the slow pace. Television assumes that to interest anyone, things must be wham-bam whizzy-whirl, but I'm sure more people are put off by this.
Look how popular the 'slow-tv' episodes were at Christmas, eg the canal boat or the sleigh ride in the arctic circle. The whizz-bang is plenty catered for on every other channel.
I have an interest in model railways, but I won't lose any sleep over missing future episodes of this. So if I'm not interested in the programme, why would any potential newcomer to the hobby?
I'll stick to 'layouts under construction' on this forum for my glimpses of the hobby thanks.
Just my thoughts!

My only comment from Friday nights show was that there was much made of the derailments on the English Ferry Terminal layout, yet the "drivers eye view" shots of the Xmas layout showed some pretty ropey running of the 00 GWR loco, in two shots the tender wheel and later one of the loco wheels were far from in contact with the rail.

alan_r I think you have managed to miss the whole point of the programme. You have looked at it from a Modellers perspective.

But it's not a Modelling Show, it's a Game show... That just happens to use Railway Modelling as it's source material.

So you will never get what you want as what we modellers want to see won't fetch in the viewing public.

As for whether it will get new entrants to the Hobby, so far evidence is that it will, several others have said that at general model railway exhibitions numbers have been up since it started. Extra numbers through the door will increase numbers of modellers, albeit temporarily, all we have to do is encourage them to stay and not be boring whilst doing it!
Top
Post Reply
162 posts