My latest garden railway is in G and is six years old, though currently suffering neglect due to ill-health.

Being a firm believer, even before I became ill, in Rommel's Dictum*, I have used some unusual material and methods some of which have proven very good moves. Others, less so.

Here. a few pictures and comments on some buildings.
Looking at the prices for pre-made and kit G-scale buildings, "throwing money at it" was not not going to be a viable route.
(just occasionally it can be worth spending money to save time.)

My first test piece was a little two-room Cornish cottage. This is just about due for a lick of paint after five years (better than my house has fared in the weather, really.)

The cottage is shaped out of 50mm layers of urethane insulation board, glued together.
Then rendered. The material is waterproof bathroom tile cement.

In this case I tried forming the doors and windows by making polystyrene dies and "stamping" the windows and door into the wet render surface.
It wasn't unsuccessful, and was quick and cheap but I've not persisted with that method. Finding a good inert release agent and the exact right moment in the "going off" of the render to use the stamp was a hassle.
The roof is plastic tile sheet I had around. It has not yet given up under UV exposure, though I will not be buying more plastic tiling.

Paint: exterior white matt, and acrylics.
A few slate chips were added to give "real stone" look in places, as can be sometimes been seen on the real thing.
Another thing not persisted with, as adding a little extra tile adhesive, or milliput, and shaping and painting for details proved a better route.


Cornish engine house:
Basic structure shape carved in urethane foam.
(about 2/3 proper size, but fits well enough in proportion to the "compressed distances" of the railway.)

In location on mound, which serves to restrict view of end loop.
Again waterproof tile cement as render, this time worked a little more to give a rough impression of stone and brick, accentuated by the acrylic paints.

Here, weathered in after a few years, plant growth bedding it in more, too.

The chapel, and the pub, next time.
Some different techniques.

*"if you have a difficult job to do, give it to a lazy man. He will find an easy way to do it."
"It's his madness that keeps him sane."
Top

The cores for the pub and the chapel.
Nice fun, rough work.

The loco is a GRS bodykit Hunslett on a Playmobil track-power chassis.
The coaches are GRS modular kits (money saved buy buying kits for longer coaches and home-building the extra ends required.) 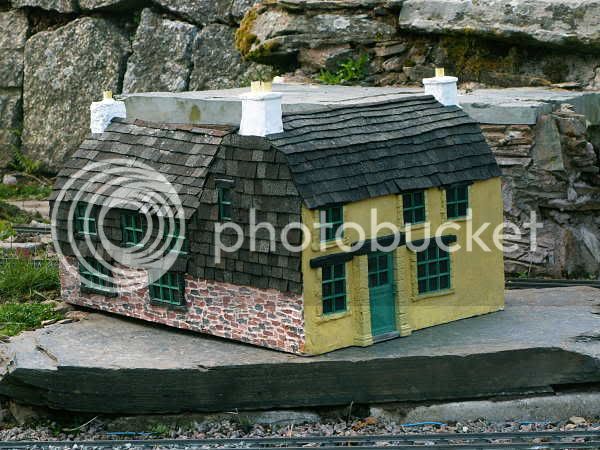 The windows and door are industrial ones, cut down from a pack of such and simply applied, with the window and door surrounds from Milliput and some cast stones. More on these with the chapel.
The roof tiles are cut roofing felt, also used on the chapel.
They look good, but never, never again. Far too much hard work involved.
The future plan is to use tiles cut from the metal foil which covers the foam boards. This proves to be nicely tough enough and nicely not too tough.
The same waterproof tile cement gave the smooth render finish on the front and the chimneys and the rougher stone simulation on the side.

The local pub I was working from, but not to accurate scale.

The chapel, finished.
The stones, plain and specialised, were cast from silicone moulds by Hirst castings.
For exterior use I used quick drying waterproof patching cement as the medium. This has survived perfectly with the stones superglued to the foam core for stability. The standard blocks are 1" by 1/2" by 1/2". (6ft by 3ft in 4mm /ft: civic building stuff)

Hirst arts' main intention for the blocks was to produce a wide range of castles, dungeons and other features, principally for use with 20-25 mm figures.
The moulds or molds are not cheap, but from my experience do last, even when being used with cement rather than a plaster or imitation stone mix.
http://www.hirstarts.com/ Some moulds are available in the UK.
Casting the blocks again and again from the same mould was a little wearisome, and despite the impressive solid sense of the final result, It'l be a while before I want to do the same again. That goes treble for the roofing felt roof.

The plan, just past planning but on hold, was to produce a station buildings for the line each a little different but with a clear family resemblance.
Foam cores, but with the stone castings just used for corner quoins and window and door features, the rest of the building getting an (easier) render finish.
Progress awaits better health. 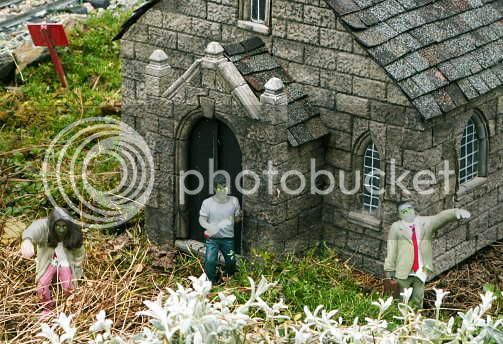 This is fabulous stuff. The lasts picture I thought was based on Matching Green in Essex (the real Essex) where an old guy built statues in his garden - almost Wallace and Grommit like characters. Then I saw your reference to "infested".

The quirky nature of the buildings especially suits G Scale railways in my view. Marvous.
Top

I admit to be nearer "playing trains" but aim for something that makes sense by its own internal logic.
Whether that's building a garden railway or an Emett one.

Troga mill with working waterwheel. It will get a better roof and a few other details reworked when it's turn for repair and restoration comes around.

On its last open day, on the sun.
The wheel is a hamster one, with vanes added externally.

Chris,
"It's his madness that keeps him sane."
Top

I agree with ParkeNd -- Excellent buildings that look 'at home' in the garden. Like the look of the railway as well.

Summer of 2011 was when it had its last properly busy time...

... but I have since managed to increase both of the main passenger rakes by one matching coach each since then, taking them to the designed improvement limit on length available in my previous garden for run-rounds and passing loops.

The locos are either largely scratch-built or modified, the kit-built Hunslet in the picture above being the least so, merely running on a chassis other than the one intended.

At the back here is an Anglicised LGB Stainz, while in the foreground the maintenance dept's vertical boiler loco would not be acknowledged by either of its parents.
"It's his madness that keeps him sane."
Top

Those buildings look amazing. particularly the chapel. As has been said, you never go for the utmost realism in G scale - it would just be too expensive and difficult, so instead you get some fabulous quirky and brilliant railways like yours. I like it a lot

RUDDY BRILLIANT!!!!!!
I used to live over the road from a Cornish engine house and your model of one is almost exactly the same!
Also, who would have thought that the living dead enjoyed model railways, even in G(houl) scale

One suggestion though on the church, have you thought about making it a it more "Wellesley chapel" like, as most of the churches I have seen in Cornwall are of this type?
Cornwall is like a second home to me and I think you've encapsulated it perfectly.
Do you have any videos of the layout running per chance? As i'd love to see it in action.
Thanks
End2end
"St Blazey's" - The progress and predicaments.
Welcome‎
Planning
Building
St. Blazey's Works & Depot thread
Top

Thank you, thank you.

One suggestion though on the church, have you thought about making it a it more "Wellesley chapel" like, as most of the churches I have seen in Cornwall are of this type?

I got Wesley wrong too, when checking for images.
See http://tinyurl.com/mzhq3wk

There's a lot of choice, and I think mine's not that far removed from some of the simpler ones.
Anything large enough to have pillars in front would have been too big for anything else,
(and to be honest too much work!)
There are two Wesleyan chapels in my village, both now private houses.
That's largely the way of it.
A much smaller agricultural population since mechanisation, and what's left on the whole less religious.

Do you have any videos of the layout running per chance? As i'd love to see it in action.
Thanks
End2end

Only a couple of bits, from early on... cameras and videos are not really my thing.

First when I'd just got a continuous (but not fully trued) main oval,
https://www.youtube.com/watch?v=V3TNgprAVGI

And a bit later on: stills, and the new old works loco. (good grief, that was five years ago!)
https://www.youtube.com/watch?v=ftQdWxS ... SqFgP5XGdA

I'd got the water-feature stream running but had not built the working watermill.

Chris,
"It's his madness that keeps him sane."
Top

Emettman wrote:There's a lot of choice, and I think mine's not that far removed from some of the simpler ones. Anything large enough to have pillars in front would have been too big for anything else, (and to be honest too much work!). There are two Wesleyan chapels in my village, both now private houses.
That's largely the way of it. A much smaller agricultural population since mechanisation, and what's left on the whole less religious.

Thanks for the videos too, I enjoyed watching them. Will there be anymore in the future showing perhaps the working watermill too?
Thanks
End2end
"St Blazey's" - The progress and predicaments.
Welcome‎
Planning
Building
St. Blazey's Works & Depot thread
Top

End2end wrote:
Thanks for the videos too, I enjoyed watching them. Will there be anymore in the future showing perhaps the working watermill too?
Thanks
End2end

I'm afraid not. Not to put too fine a point on it, I am crippled.
I have severe Chronic Fatigue Syndrome, and haven't even been able to clear the line to run a single train this year. I do have weekly help from a gardener which prevents things getting too far out of control, but I have to look for distractions that can be pursued in very short bursts of minimal physical activity, hence the current fiddling around with R/C 00 shunters.

Going to a model railway show is out of the question, never mind exhibiting, as I used to do regularly.

Did make this two years ago, though

As for Chronic Fatigue Syndrome, I think we older ones get it a lot. Have had to move my layout from the loft to son's bedroom. ( No I didn't throw him out. He is married now

Glencairn
To the world you are someone. To someone you are their world.
I Cannot Afford the Luxury of a Negative Thought
Top
Post Reply
12 posts • Page 1 of 1