A weird bit of Lima kit.

A weird bit of Lima kit.

When I saw this on eBay I knew I had to get it, just to prove the thing existed...
... because I couldn't think of a reason why it should.

Advertised as "Hornby Turntable" though it comes with "Lima Italy" on the bottom. 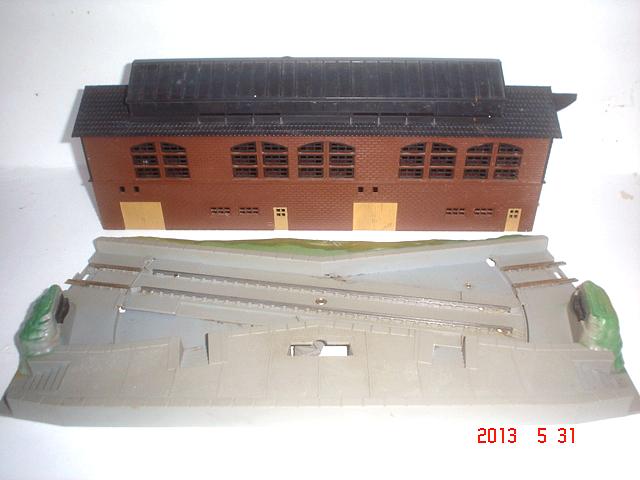 Yes, it does, poorly, the job of a curved piece of track.
It comes with the workshop with a track laid internally.
I could barely find any pictures of it or web reference, but apparently this is Lima item number 952.

Thing is, this could be made quite useful by removing the two "earth mound" bufferstops and laying track in those locations:
at the end of a platform, a loco release and two roads to an engine shed neatly and interestingly.

Only if this is *truly* rare (because no-one in their right mind would have bought one), I might be foolish to chop away at a collectable, even though my version is pretty battered.

The only thing I have seen that looks remotely close to or in the same range is the Lima Swing Bridge.

OK after a bit of digging I have found this.

End2end wrote:The only thing I have seen that looks remotely close to or in the same range is the Lima Swing Bridge.

Now that wasn't uncommon: I remember it from the sixties.
Though still pretty illogical, coming to look at it.
"With automatic trains stop" ? What, by crashing into it or did it ave isolating sections built into it?

Yes that picture is one I'd found.
Hmm, should have a massive "uncoupler" too. That might be more trackable and datable.

From the above it was in the '74 -'75 catalogue, and was sold separately and as part of a set.


With a couple of others also on sale on the Italian site, it's rare but not that rare. I shall have mine my way, and give it remote operation it with a Lego linear actuator.

If there were two tracks at one end it would qualify (almost) as a "sector plate". I've just been looking at the picture of one that once existed at Birmingham Snow Hill.
http://www.warwickshirerailways.com/gwr/birmingham-snowhill/structures/gwrbsh1679.jpg
This had three tracks on the table, the outside ones to catch over running stock.
Growing old, can't avoid it. Growing up, forget it!
My Layout, My Workbench Blog and My Opinions
Top

Sector plates are an early feature of the railways, as engineers worked out what was the most reliable equipment for the money. They were never common, it is an expensive piece of construction as you need a bridge deck on a pivot. That's really only justifiable for the 'full turn' of a turntable. Take a look at early UK stations and yards and another thing you will see are small turntables just long enough for wagons. These enable sidings to go off at any angle, very convenient. Wagon lifts too were once fairly regularly deployed to move wagons between levels, and also in various forms to off load wagons: end tipping often found on dock staithes, and roll over tipping termed 'tippling'.

Eventually regular points won out, and these devices were typically replaced in all running lines on which locos operated. The bottom or side discharge hopper wagon was generally settled on as the most efficient 'pour out' approach for bulk solids, as the trouble with lifts and tipplers is that if they break down the whole operation stops, whereas a single wagon hopper door's failing just sees that one wagon shunted aside. Wagon turntables and lifts hung on in cramped goods yards in cities though, where there wasn't the space for the point work or long approaches on gradients to change level. Most strikingly the wagon lift had something of a late comeback in the form of coaling towers, (although these were not without their critics as a cheaper hopper wagon into over track hopper system was perfectly possible on many sites, an automated bilk handling update of the old 'ramp to coaling stage' system).
Top

Bufferstop wrote:If there were two tracks at one end it would qualify (almost) as a "sector plate". I've just been looking at the picture of one that once existed at Birmingham Snow Hill.
http://www.warwickshirerailways.com/gwr/birmingham-snowhill/structures/gwrbsh1679.jpg
This had three tracks on the table, the outside ones to catch over running stock.

Now that is weird. I'm having to call up memory, though I may be able to back this up later, of seeing diagrams of the traverser clearly showing it as a having a parallel motion, not a pivot point as in a sector table.

That seemed to be confirmed when I found this: And "One of the Moor Street traverser tables " It had two, it seems, next to each other.

Ah, and now it becomes clearer: That's Moor Street, Birmingham, while at Snow Hill, Birmingham "[a]t the end of the bay platforms on the down side a 70 foot electric sector turntable has been provided."
a plan drawing here: http://www.warwickshirerailways.com/gwr/gwrbsh1680.htm Frogs with no matching check rails.

Much of this is new to me, having only previously picked up from brief references little more than that "a station in Birmingham actually had a traverser," not that there were three of them, in two designs, at two different stations.

Which only leaves as an aside that, yes, a scattering of stations did have a full turntable directly at the end of the platform roads.
It's there to do if you have to, or want to.
"It's his madness that keeps him sane."
Top

Moor Street was definitely a Traverser, not a Sector Plate which is a piece of track pivoted at one end and replaces a point in a place where space is tight. Whilst they are not common in the UK (the Isle of Wight is the only example I can think of on BR) there are quite a few dotted around Europe. I can think of at least 4 I've seen on my travels.

The reason for their existence is to allow the loco to run round it's train without using a point where space was tight and they work very well and are a lot simpler than a traverser which are very common at railway workshops...

As for that thing, I'd say it was purely a toy, rather like Triang's Giraffe Car, however if you removed one of those "buffer stops" you could make it into a sort of sector plate...
Top

b308 wrote:
As for that thing, I'd say it was purely a toy, rather like Triang's Giraffe Car, however if you removed one of those "buffer stops" you could make it into a sort of sector plate...

Exactly my thinking, though I'm aiming to to take off both buffer-stops so I have the option of two loco-sidings beyond the sector plate, which would rather bust the real-world "cramped location" reason for having the sector plate in the first place, but add options for pure space and point saving arrangements on a micro-layout, in sight or out-of-sight.
More easy (or plausible ) in an industrial setting, I suspect.
But I may have to call the "prototype for everything" department.

The perspective looks a bit odd in the Snow Hill picture, which gives the impression that the pivot point is not at the far end but somewhere beneath the loco. However I have some track plans of Snow Hill in a couple of books which show it as being of the pivot at one end design. It would appear that at some point possibly during the remodelling of Snow Hill that it was removed from it's dingy hole next to the tunnel entrance and resited at the other end of the station. Probably to extract a little more use from a rather expensive bit of kit. Whilst the sector plate didn't last too long the Moor Street traverser was still there in the early sixties. It didn't appear to have moved for many years, but unlike the sector plate it didn't prevent the normal use of that part of the platforms.
Growing old, can't avoid it. Growing up, forget it!
My Layout, My Workbench Blog and My Opinions
Top

What sector plate was that at Snow Hill, B? Any photos?! You can pivot a Sector plate at any point in theory, the main thing is that it can't do a full circle as it then morphs into a turntable!

This page shows the Moor Street traverser "out of it's shell": Unusual because it had more than two rails on the plate, (see my earlier photo of the French one for the more conventional design...

As was Bembridge in the Isle of Wight which looks like a small turntable but does not go all the way round and so is a sector plate:

For an end-of-platform working overtime, Rothbury.

I don't know if a short loco could fit on the turntable with a coal or goods wagon, or whether they were horse- or man-handled to the spurs.
Difficult to model, that.

Chris
"It's his madness that keeps him sane."
Top
Post Reply
17 posts